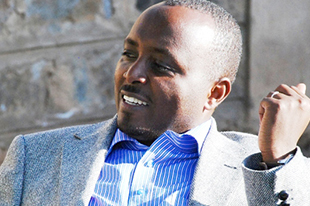 Sammy Mwiti is a communications specialist for the United Nations Development Programme (UNDP) in Harare, Zimbabwe, where he writes news and feature stories highlighting the UNDP's work in democratic governance, poverty reduction, crisis recovery and the treatment and prevention of HIV/AIDS, malaria and tuberculosis.

Since 2002, the UNDP has administered funds from the Global Fund, the world's largest financier of anti-AIDS, tuberculosis and malaria programs.

"Good communications helps us mobilize resources for the people we serve, form partnerships, and demonstrate that we're using our resources wisely," Mwiti says.

Mwiti has worked for the United Nations since 1999, when he helped supervise the historic referendum in East Timor that paved the way for the country's restoration of independence from Indonesia. He later assisted with the UN peacekeeping mission in Ethiopia formed in 2000 after the Eritrean-Ethiopian War, documenting the mission's engagement with political and human rights groups.

"Participating in two UN missions, I came face-to-face with the human cost of war and the intrinsic value of peace," Mwiti says. "Since then I've continued to ask how I can contribute to global peace."

When he's not monitoring local and international media, writing news stories, or promoting UN programs via social media, Mwiti travels to the field to witness firsthand how UN programs are combating and preventing disease. Originally from Nairobi, Kenya, he holds a postgraduate diploma in journalism and has worked as a newspaper journalist.

"As a peace studies student at Notre Dame, I focused on global politics and international norms," Mwiti says. "Learning about international human rights, humanitarian law, global governance and the role of the UN system prepared me well for my UN career."