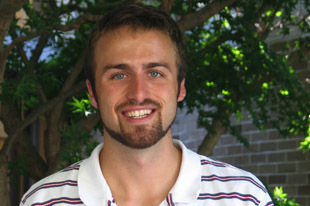 Peter Quaranto works as a Senior Advisor for Peace and Security in the Office of U.S. Foreign Assistance Resources at the Department of State. In this role, he develops evidence-based policies for prioritizing and targeting U.S. foreign assistance to achieve peacebuilding, stabilization, countering violent extremism (CVE), and security sector goals.

During his work with the Bureau of Arican Affairs, Peter helped to direct policy efforts for the Obama administration's strategy to support the disarmament of the Lord's Resistance Army. And with the Bureau of Counterterrorism, Peter authored and led the development of the first-ever Joint State and USAID Strategy on Countering Violent Extremism.

As a Notre Dame undergraduate majoring in political science and peace studies, Peter traveled to northern Uganda to conduct research on the long and brutal conflict between the government and the Lord's Resistance Army. What he saw and heard there also motivated him to take action.

"In the displacement camps, I saw the most inhumane conditions I could ever imagine," Peter said. "The temptation was to give in to the cynical view that humans are evil and things will never change. But the courage and resilience of northern Ugandans, and the compassion and resolve of Americans, has shown me the potential for good. That change is possible."

Together with Michael Poffenberger, B.A. '05, and three other Notre Dame undergraduates, Peter founded the Uganda Conflict Action Network (UgandaCan) a campaign to advocate, lobby, and act to end the war in northern Uganda. The network has recently become Resolve Uganda, a U.S.-based organization advocating for international leadership and policy change.

Peter received his master's degree in peace studies from the University of Bradford in England, where he researched the role of U.S. policy in the recent Somali conflict. As a a Marshall Scholar at Oxford University he studied the role of diplomacy in African peace processes.