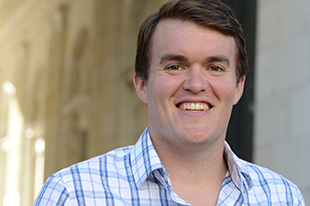 Michael Poffenberger is executive director of the Center for Action and Contemplation in Albuquerque, New Mexico, an education and retreat center that connects spirituality with service to the world.

"Through teaching and contemplative practice grounded in the writings of Christian mystics, we help people see themselves and others in different ways, especially those on the margins," says Michael, who joined the Center in 2014. "Our goal is to provide our students with transformational tools for healing and reconciliation."

Before joining the Center for Action and Contemplation, Michael was executive director of Resolve, a Washington, D.C.-based organization that works to end atrocities committed by the Lord's Resistance Army (LRA) in Uganda, South Sudan, the Democratic Republic of Congo, and the Central African Republic.

As Resolve's director, Michael oversaw field research, advocated with political leaders, and facilitated nationwide campaigns focused on ending the LRA's reign of terror and helping affected communities rebuild their lives. He co-founded Resolve in 2005 after studying in Uganda as an undergraduate with fellow peace studies student Peter Quaranto, and graduated from Notre Dame with degrees in anthropology and peace studies.

"Studying at the Kroc Institute, with its emphasis on the religious dimensions of both violence and peacebuilding, helped me understand how spiritual formation and religious beliefs shape our worldviews," Michael says. "My hope is that our work at the Center can heal the divisions that lead to violence by forming a generation of peacemakers."