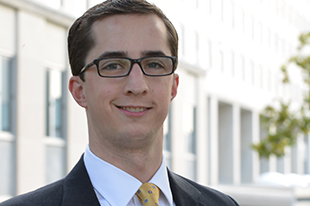 Matthew Walsh is chief of staff for the Broadcasting Board of Governors, an organization that encompasses all U.S. civilian international broadcasting, including the Voice of America (VOA), Radio Free Europe/Radio Liberty (RFE/RL), Radio Free Asia (RFA), Radio and TV Martí, and the Middle East Broadcasting Networks (MBN)—Radio Sawa and Alhurra Television. Broadcasters within BBG distribute programming to an estimated weekly audience of 278 million people in 61 different languages.

Prior to taking on this role, Matt served in a number of roles with the U.S. State Department. From 2011-14, was a member of the U.S. Secretary of State's Policy Planning Staff in Washington, D.C., where he focused on Africa and development. In that role, Matt conducted policy research, made policy recommendations on Africa and development strategy, and contributed to speech writing for the Secretary of State.

"One of our jobs is to provide the Secretary of State with second opinions on policy issues," said Matt. "It's an exciting job that goes to the heart of almost every foreign policy debate and can have a real influence on policy."

Matt graduated from Notre Dame in 2006 with degrees in political science and peace studies. As an undergraduate, he conducted research on economic sanctions with Kroc professors George A. Lopez and David Cortright and wrote an honors thesis on how to improve coordination of international peacebuilding efforts. He also holds a master's degree in conflict management and international economics from Johns Hopkins University.

"At Notre Dame I learned how to influence policy by working within the system," Matt says. "My peace studies education taught me how to advocate effectively."