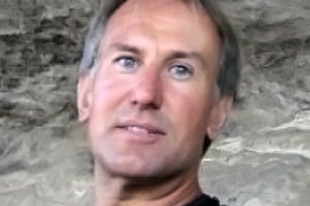 Mark Behr (1963-2015), born in Tanzania and raised in South Africa, was a talented author who addressed race, gender, and militarization within contemporary authoritarian cultures.

His first novel, The Smell of Apples, was published in Afrikaans in 1993 while he was a student of the Kroc Institute, and in English in 1995. He has since published two more award-winning novels, Embrace and Kings of the Water. His work has been awarded prizes in Africa, Europe, and the United States, and has been translated into 10 languages.

In an extensive 2010 interview with Mark published in Safundi: The Journal of South African and American Studies, Mark notes, "Working in the International Peace Studies tradition, which is premised on an approach that is international, interdisciplinary, non-violent, and praxis-oriented, had a lasting impact on my own understanding of conflict and conflict transformation. Even without knowing that this is what I do I try to live by these, and to teach literature very much with these ideas at the heart of my pedagogy. Once I started studying Feminist, Post Colonial and Queer approaches to literature, I found that these all sat very comfortably beside Peace Studies' activist intentions."

Mark earned Notre Dame master's degrees in fiction writing and English literature. Describing his work, Mark said: "I teach literature and writing in ways that are deeply and profoundly informed by the activism I believe is a part of the best kinds of peace studies."