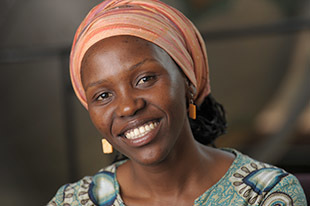 Makena Kirima is a conflict specialist in USAID Kenya's Office of Democracy, Rights and Governance. She is the activity manager for Kenya Tuna Uwezo ("We Have the Power" in Kiswahili), a USAID-funded program to reduce political violence in Nairobi.

Makena helped launch Tuna Uwezo after an outbreak of violent protests during Kenya's 2007-08 presidential election. The program operates in four of Nairobi's largest slums and works to initiate dialogue among groups at risk of violence, train community leaders to work across ethnic lines, and provide youth with economic incentives for sustaining peace.

"We've had scores of young people join the program out of their own volition," says Makena, who also serves as office advisor on youth affairs. "Some of these young people previously were terrorizing their communities. "It's very exciting to see things changing."

Makena came to Notre Dame as a Fulbright Scholar. As a master's student in international peace studies she did her fieldwork at the Israel/Palestine Centre for Research and Information in Jerusalem.

"My Kroc experience helped me analyze the nuances of conflict when people have real, genuine differences," Makena said. "Having learned both peacebuilding theory and practice, I'm better equipped to find solutions to violent conflict and its effects on democracy and human rights."

Makena also has worked for the UN High Commissioner for Refugees and Youth Alive Kenya. After graduating from Notre Dame in 2010, she participated in President Barack Obama's Young African Leaders Forum at the White House.