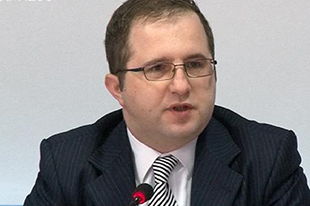 Prior to his time as ambassador, Leon was co-founder and executive director of Democracy for Development (D4D), a think tank in Pristina, Kosovo, dedicated to public policy research on links between democracy and development.

Leon founded D4D in 2010, two years after the Republic of Kosovo declared independence from Serbia on February 15, 2008.

"A young democracy can be fragile and potentially reversible," Leon said. "We want to prevent reversion, promote peace, and guide decision-making in the direction of a healthy democracy."

Democracy for Development conducts interdisciplinary research to assist the country's development by highlighting solutions to challenges faced by a new democracy. The group also mediates between Albanian and Serb politicians.

Before founding D4D, Leon served as a regional representative for the European Centre for Minority Issues in Flensberg, Germany. He also has worked as research director at the Kosovar Institute for Policy Research and Development, served as advisor to Kosovo's deputy prime minister, and taught political science at several Kosovar universities.

Leon applied to the Kroc Institute's master's program in international peace studies in 1998, just as tensions between Serbians and ethnic Albanians were reaching their peak in the former Yugoslavia.

"Engaging peace studies seemed very important because my country was nearly engaged in full-fledged war," Leon said. "It's not surprising that I chose it under these circumstances, and I would choose it again today."