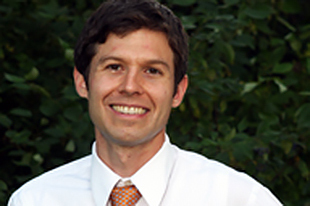 Josh Jacobs-Velde provides spiritual leadership at Oseh Shalom, a vibrant Reconstructionist synagogue in Laurel, Maryland, that serves as the spiritual home for about 240 families. Ordained in June 2011, Josh shares the post with his wife, Daria, also a rabbi.

Josh and Daria's responsibilities at Oseh Shalom include everything from leading weekly Shabbat services to teaching and studying the Torah to building relationships within the wider community.

Prior to serving at Oseh Shalom, Josh and Daria provided leadership for Zmanim, a "nature-connected, spiritual Jewish community," in Sebastopol, California, from 2013-2017, and as rabbis at Ohev Tzedek in Youngstown, Ohio, from 2011-2013.

After his time at Notre Dame, Josh studied anthropology at the University of California, Santa Cruz, and worked as a peace activist in Israel and Palestine, volunteering with the grassroots organizations Christian Peacemaker Teams and Ta'ayush, which focus on finding nonviolent solutions to the region's long-standing conflict.

"My interest in peace studies grew out of my activism," Josh says. "My time at the Kroc Institute helped me ground that interest in an intellectual framework."

"Getting to know that incredibly diverse array of people enriched my life intellectually and socially," he says. As a master's student, Josh enrolled in Kroc director Scott Appleby's course in religion and peacebuilding.

"As with most religions, peace is a major value in Judaism," Josh says. "Professor Appleby's course helped me understand the power of the sacred as a tool for building peace.

"Peace has great theological significance in the Jewish tradition," he says. "It's about redemption and moving ever incrementally toward the Messianic Age. My Kroc experience grounded that belief in an intellectual framework and in the stories, work, and lives of my classmates."