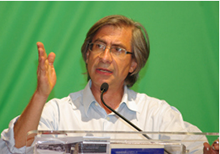 Jorge Vargas-Cullell is the Director of Estado de la Nación (State of the Nation), a Costa Rica-based center of thought that conducts research on sustainable development. He is also the coordinator fo the Citizen Audit on the Quality of Democracy, also in Costa Rica.

"We promote the notion that development is about much more than economic growth," Jorge says. "It also involves equity, the environment, democracy, and human rights."

Founded in 1994 as a collaborative project with the United Nations Development Program, Estado de la Nación aims to encourage study and discussion of human development in Costa Rica and in Central American countries by improving citizen access to comprehensive, timely and accurate information on matters of public interest. Reports published by Estado de la Nación, which is now sponsored by a group of Costa Rican universities, are used regularly by policymakers, universities, entrepreneurs, labor unions, and community groups.

"In a way we are mediating between very diverse groups with different interests," Jorge says. "We try to build a common platform of data and analysis so they can solve their differences."

Jorge, who joined Estado de la Nación in 1996, now supervises a team of 18 researchers who collaborate with a network of nearly 150 scholars throughout Costa Rica and Central America. Often, he says, their research brings to light complex issues such as impunity in the legal systems or human rights violations.

"Information is power," Jorge adds. "It enables people to participate in public life in a high-quality way without relying on prejudice."

A former Fulbright Scholar, Jorge also holds a Ph.D. in political science from Notre Dame. As an academic researcher, he specializes in quality of democracy and citizen support for democracy, focusing on Central America.