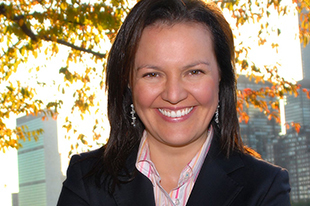 Adriana Quiñones Giraldo is the Country Representative for UN Women Guatemala, the United Nations entity that supports the empowerment of women and girls. She is based in Guatemala City. In this role, Adriana gives leadership to programs and initiatives addressing violence against women, adolescents and children.

Prior to serving in Guatemala City, Quiñones Giraldo was regional advisor for the Elimination of Violence Against Women initiative at UN Women. Based in Panama City, Panama, Adriana planned the use of resources, reported program results to donors, and ensured that resources went directly to the women who needed them. She also coordinated UN Women's work with other UN agencies, working to ensure women's rights and voices were included when priorities were set.

From 2008 to 2012, Adriana served as manager of the UN Trust Fund to End Violence Against Women, where she oversaw a grants portfolio of more than $40 million in 76 countries. She also worked as Technical Advisor for the Fund for Integration of Gender Equality at the Inter-American Development Bank (IADB), in Washington DC At the IADB, she developed strategies for women's economic, social, and political empowerment, focusing on addressing gender-based violence and supporting people living with HIV/AIDS.

Before coming to Notre Dame, Adriana served as advisor to the UN High Commissioner for Peace in Colombia, where she documented human rights violations and addressed the needs of displaced populations.

Growing up in Colombia, Adriana was affected deeply by the country's protracted armed conflict and widespread human rights violations, she says. This experience, led her to pursue a master's degree in international peace studies at Notre Dame. She also holds an M.A. degree in international relations from John Hopkins University School of Advanced International Studies.

"My classmates at Kroc – from places like Egypt, Turkey, the Congo, and Nepal – had experiences very similar to mine," she says. "I started to understand how many struggles were universal  and how many of the solutions might have universal components, too."