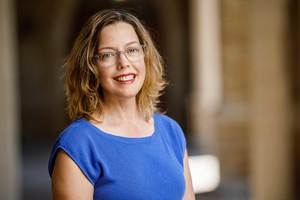 President Donald Trump on Monday (Feb. 19) stopped short of expressly threatening military action in Venezuela when he urged the country to remove its disputed socialist president, Nicolás Maduro, and to allow humanitarian aid to enter the country.

Trump condemned socialism and voiced strong support for the self-proclaimed interim president Juan Guaidó, but Mary Ellen O’Connell, Notre Dame law school professor and renowned expert on international law, raised concerns about Trump’s statement: “We seek a peaceful transition of power, but all options are open.” She says if that means attacking, it would be in clear violation of international law.

“President Trump has invoked the standard code for using military force against Venezuela,” O’Connell says. “Attacking for any reason, however, would violate the most fundamental of all international law — the prohibition on the use of force. International law permits force in response to an armed attack in self-defense, but not for regime change, to secure oil or even to distribute food.”

Venezuela’s government closed down a maritime border and grounded flights as the opposition party seeks to import foreign aid. People in the country are struggling to get enough food and medicine, but Maduro’s government is trying to prevent aid from getting in. He says the country doesn’t need it, though conditions have been so dire that more than 3 million people have fled Venezuela.

“Regardless of how odious Maduro is, he is in effective control,” O’Connell says. “Under international law, he is treated as the head of government. The fact the U.S. and other states have recognized opposition leader Guaidó as the legitimate president is irrelevant for these purposes. Guaidó must win the support of the military and other Maduro backers to govern. It is governing that matters, not the preferences of outside states.”

O’Connell says military action will cause as much pain as it might relieve for suffering Venezuelans.

“There are no ‘humanitarian wars,’” she says. “Nor is military confrontation a way to promote good governance and the rule of law. The U.S. has become so accustomed to using military force — from full-scale invasions to constant drone attacks — we don’t seem to be able to think of anything else to do.

“But the world is changing. The U.S. is no longer the only superpower. We cannot dictate terms to others. A country in our position needs the law to constrain competitors and to promote cooperation. We cannot dismiss international law as only binding on other states. Indeed, the U.S. needs law more than ever to constrain imperious presidents — at home and abroad.”

O’Connell, the University of Notre Dame’s Robert and Marion Short Professor of Law and research professor of international dispute resolution at the Kroc Institute for International Peace Studies, is author of “The Popular but Unlawful Armed Reprisal,” published in the Ohio Northern Law Review, and is co-author of “Self-Defense against Non-State Actors.”

Last spring, O’Connell served as a Fulbright Fellow at the Norwegian Nobel Institute. She also has been a professional military educator for the U.S. Department of Defense.

Originally published by Shannon Roddel at news.nd.edu on February 20, 2019.