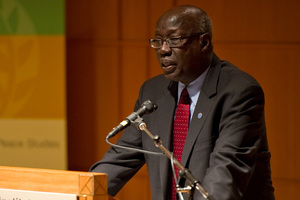 Francis Deng, Special Advisor to the United Nations Secretary-General on the Prevention of Genocide and Mass Atrocities, will deliver the 17th Annual Rev. Theodore M. Hesburgh, C.S.C. Lecture in Ethics and Public Policy at 4 p.m., April 19 (Tuesday) in the Hesburgh Center Auditorium at Notre Dame.

Deng's lecture, "The Paradox of National Protection in Divided Nations," is free and open to the public.

Deng is an expert in conflict management and resolution, human rights, and U.S.-Africa relations. In addition to his work at the United Nations, he directs the Sudan Peace Support Project at the United States Institute of Peace. He also is a Wilhelm Fellow at the Center for International Studies at the Massachusetts Institute of Technology and a research professor of international politics, law, and society at Johns Hopkins University's Paul H. Nitze School of Advanced International Studies.

Deng has served as a distinguished visiting scholar at the John Kluge Center of the Library of Congress. From 1992 to 2004, he was a representative for the U.N. Secretary-General on Internally Displaced Persons, and from 2002 to 2003 he was a senior fellow at the United States Institute of Peace. He served as a human rights officer in the UN Secretariat from 1967 to 1972 and as the Ambassador of the Sudan to Canada, Denmark, Finland, Norway, Sweden, and the United States. He also served as the Sudan’s Minister of State for Foreign Affairs.

Deng was appointed as a guest scholar and a senior research associate at the Woodrow Wilson International Center and later joined the Brookings Institution as a senior fellow. He was then appointed distinguished professor at the Graduate Center of the City University of New York.

Deng is co-recipient with Roberta Cohen of the 2005 Grawemeyer Award for “Ideas Improving World Order” and the 2007 Merage Foundation American Dream Leadership Award. He also received the Rome Prize for Peace and Humanitarian Action. He has authored and edited more than 30 books on law, conflict resolution, internal displacement, human rights, anthropology, folklore, history, and politics, and he has also written two novels on the crisis of national identity in Sudan.