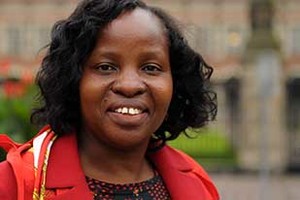 Rosette Muzigo-Morrison, M.A. ‘93, has been selected to receive the Kroc Institute’s 2011 Distinguished Alumni Award. A legal officer with the United Nations International Criminal Tribunal for Rwanda, Muzigo-Morrison is based in The Hague in the Netherlands. She is the longest-serving legal officer at the Tribunal, which was created in 1994 to prosecute those responsible for the Rwandan genocide, restore peace, and foster reconciliation.

Muzigo-Morrison will deliver a lecture titled “Achieving Peace through Justice: Reflections on International Criminal Tribunals” at 4:00 p.m. on Tues., February 22, 2011, in the Hesburgh Center Auditorium.

Muzigo-Morrison’s legal work over the span of 15 years has brought her into contact with alleged perpetrators, often heads of state. For example, she recently completed a special assignment with the Special Court for Sierra Leone, where she was responsible for the establishment of a Sub-Office for the Prosecution of Charles Taylor, former president of Liberia, who is being held in the United Nations Detention Unit in The Hague. Previously, she helped coordinate the detention of former Rwandan Prime Minister Jean Kambanda.

Muzigo-Morrison also has worked with hundreds of victims and witnesses.

“It’s quite an experience to hear what these trials mean for victims,” she said. “What’s most intriguing to me is that most are not interested in retribution or the harshest possible punishment. They feel vindicated simply by having the opportunity to tell the world what they have suffered.”

International criminal tribunals are established by the United Nations not only to prosecute those responsible for genocide, crimes against humanity, and violations of international humanitarian law, but also to promote peace and reconciliation.

“You have to keep the victims in mind, but you also have to remember the accused are presumed innocent until the contrary is proven,” Muzigo-Morrison said. “I consider myself fortunate to be exposed to all sides of a conflict.”

Muzigo-Morrison is earning a Ph.D. in human rights law from the Irish Centre for Human Rights. She holds an M.A. in peace studies from Notre Dame, an L.L.M. degree from Notre Dame Law School, and an LL.B. degree from Makerere University in Kampala, Uganda.

Established in 2004, the Kroc Institute’s Distinguished Alumni Award honors graduates of the master’s in peace studies program who have made exemplary contributions toward peacebuilding around the globe.