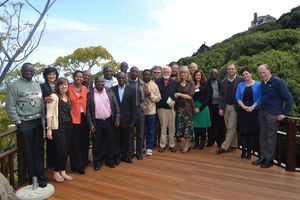 More than 60 leaders of the Ugandan Catholic Church, including a dozen bishops and archbishops, gathered in Kampala Nov. 7-9 for a workshop on reconciliation, justice and peace organized by the Uganda Catholic Secretariat in collaboration with Catholic Relief Services and the Catholic Peacebuilding Network.

"Reconciliation in Uganda in Light of Africae Munus,” was led by Kroc professor Daniel Philpott and Catholic Relief Services’ John Katunga, regional technical advisor for peacebuilding and justice in East Africa. Africae Munus, Latin for “The pledge for Africa,” is the name of a 2011 document written by Pope Benedict XVI urging Africans to work toward peace and reconciliation. The workshop was convened to create a nationwide plan to promote political and social reconciliation.

“Having experienced 60 armed conflicts in the last 30 years, Uganda has a critical need to grapple with its violent past," said Philpott, professor of political science and peace studies.

“The Catholic Church in Uganda, being influential, well-organized, and experienced in social justice work, is uniquely situated to lead such efforts.”

Philpott, an expert on reconciliation and global politics, applied the theological vision of Africae Munus to the social and political realm. The author of Just and Unjust Peace: An Ethic of Political Reconciliation, Philpott drew on his nearly 20 years of activism promoting reconciliation, most recently in Burundi, the Democratic Republic of Congo, and Uganda.

Following the workshop, Uganda’s Catholic Bishops will recruit religious and lay leaders such as pastors, diocesan leaders, catechists, and pastoral coordinators to help implement the reconciliation plan at the grassroots level. Plans include everything from homilies and parish forums on reconciliation to "peace weeks" in different regions, Philpott said.

“This is a church that has organized itself on a national level, bringing a distinctive commitment to reconciliation in a country that badly needs it," Philpott said.

“The Ugandan bishops have shown themselves already to be a prophetic voice for forgiveness and healing.”