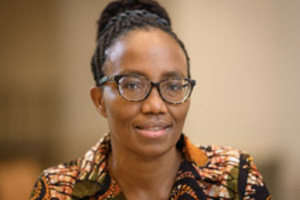 Susan Nchubiri is a Master’s student in her final semester of the Peace studies program. During the last six months, she had the opportunity to intern in Israel and Palestine at the World Council of Churches, where she served as an Ecumenical Accompanier. In this interview, Susan highlights how she accompanied Palestinians and Israeli nonviolent peace groups, and how she transformed as a peacebuilder.

What were your main activities?

I provided a protective presence to the local community, observing, monitoring and documenting human rights violations, and witnessing the locals' daily struggles and hopes. My teammates and I did school runs, so we monitored children’s access to education. Usually, in the occupied Palestinian territories, children are arbitrarily stopped by border police and detained for several hours. The teenagers, especially boys, are body-searched and violently manhandled. Often their school bags are searched, and their books are thrown on the ground. When ecumenical accompaniers are present, the violence and the duration of detention tend to be less.  We also monitored access to worship and livelihood both in Jerusalem and Bethlehem. For Palestinians to access any place of worship, livelihood, medical etc in the occupied Palestinian territories and Israel or beyond the territorial borders, they need permits to pass through the military checkpoints and the segregation barriers. The process of applying for these permits is extremely frustrating. Most of the time the permits are denied or canceled for no reason at all. There are 101 different types of permits  that govern the lives of the Palestinians in the occupied territories in the West Bank and East Jerusalem, and Israel.

What was most challenging in your internship?

The most challenging experience was witnessing the gross violation and dehumanization of the Palestinians and being unable to do anything. During the month of Ramadhan we observed, tens of thousands Palestinians Muslims were denied access to worship services at the Al Aqsa Mosque just as were hundreds of the Palestinian Christians denied access enter Jerusalem to worship during the Holy Week and Easter services. It was heart-breaking to see people who lived next door to the Holy Sepulchure Church denied access to pray there just because the Israeli government did not approve. My teammates and I tried to access the Holy Sepulchre from 7am till 3:30 pm on the Holy Fire Saturday but could not because every alley that led to the Christian Quarter in the Old City of Jerusalem where the Holy Sepulchre Church is located was blockaded by fully armored Israeli soldiers. But what enraged me most was witnessing soldiers beating up and arresting people who were only trying to go to worship.

Another thing that was challenging was to accompany  mothers, fathers, daughters, sons, and other relatives and friends as they protested the punitive detention of bodies of their relatives murdered by the Israeli authorities or Israeli settlers. Some bodies are held for years. How do you punish the dead?  Why deny people closure? How can this type of punishment deter violence and provide security? For me accompanying these grieving people and witnessing them being retraumatized over and over again was heart wrenching.

What was most rewarding?

Once, my teammate and I negotiated with the border police to let a group of students enter the school compound and take their exams. That morning we met ten teenage boys who told us they had been attacked by the border police guarding the gate to Al Aqsa Compound, where their school is located. They told us they had an exam that morning. We walked back with them to one of the gates and tried to speak to the police to let them go in for exams. The police officers would not budge. One kept saying that “they are not allowed to get to the compound.”  We walked back to the street with the boys, and a few minutes later, my teammate and I went back to speak with the same officers. This time, the officer would not even look at us. He kept moving up and down like a caged animal. We tried to draw the attention of others, but no one was forthcoming, and so we walked away.

We eventually went to another gate a few meters away but with a full view of the students. We introduced ourselves to the eight police officers who had established a flying checkpoint (a random police blockade), on the alley leading to the other gate. We told the officers that the kids were supposed to get to the compound so they could do their exams. The spokesperson among them told us that they had been ordered not to let any youth inside, but they gave us no explanation why. Then, the officer asked when the exam would take place, and we explained that students had less than 10 minutes before their start. As we talked to this soldier, another soldier telephoned someone, probably their superior, and the students were allowed to attend the exam. This experience was one of the moments I felt my time among the Palestinians had some meaning.  Other  most rewarding experiences were the occasions when we were accompanying shepherdesses and the Israeli settlers would not attack or harass them but would only call the Israeli millitary. Usually by the time the military got to the pastureland the sheep and goats would have had grazed for a couple of hours. I was happy that on those days, the shepherdesses and their flocks were safe and the sheep and goats had something to eat.  Also the many moments when the soldiers did not harass the people because they saw us watching them.  Why would such basic human rights be a privilege for millions of Palestinians?

How is your internship helping you in your future professional career?

My experience in Palestine and Israel has compelled me to do more human rights and human dignity advocacy work. I feel pulled to work more with policymakers to advocate for changes in their foreign affairs and international relations to devise a plan of action in addressing the occupation. Governments and civil international organizations have, for decades, repeatedly condemned Israel’s violation of international human rights law  and the international humanitarian law. The United Nations Human Rights Council has issued 45 resolutions condemning Israel’s violations of Palestinian human rights.   However, less has been done towards taking actions that would hold Israel accountable and pressure it to end the occupation of Palestinian land. Resolutions without actions have not proved useful.

Has your internship changed your perspectives on peace and your role as a peacebuilder?

Yes. I am more convinced of bottom-up peacebuilding than ever before. The strategies for peacebuilding must emerge from the local actors experiencing the conflict and its consequences. The people living in a conflict situation have the wisdom of the context, and they know the root causes of the conflict and what needs to be addressed to repair the broken relationships.