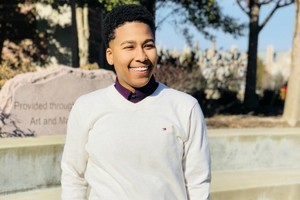 Alexis Templeton, a 24-year-old activist known for her protest work during the 2014 Ferguson Uprising, has been named as the keynote speaker for the 2018 Notre Dame Student Peace Conference, sponsored by the Kroc Institute for International Peace Studies.

The conference runs April 13-14. In addition to Templeton, undergraduate students from schools across the country will present original research and scholarship on the conference theme, "Toward Just Peace."

"So many of the questions facing the world today are questions about justice," said Elizabeth Hascher, a senior political science and peace studies major serving as co-chair for the conference planning team. "We recognized that sometimes justice and peacebuilding can go together and sometimes they can be opposed. We wanted to make space for people to talk about many of these pressing issues in our world and to consider what it means to pursue just peace."

Hascher and Erin Prestage, the other co-chair and a senior political science and peace studies major, were inspired to invite Templeton to the conference after seeing her work featured in the documentary film, Whose Streets?

Templeton is a native of Ferguson, Missouri, she is also a co-founder of Millennial Activists United (MAU), a queer-women-led activist group created on the ground during the protest. She is a “gender-nonconforming scholar” at Washington University in St. Louis. Templeton's biographical statement notes that she “centers Black people in all her efforts and endeavors and helped found MAU to empower Black women, Black youth and Black queer folks to stop asking for a seat at the table and instead start creating their own.”

MAU was a grassroots collective formed on the frontlines of the Ferguson Uprising during August 2014, when Templeton and co-founder, Brittany Ferrell, organized a multitude of actions across the city to urge people to take action.

“We were pretty sure that the themes the movie [Whose Streets?] raised were themes we wanted to dive into at the conference,” said Prestage. “We are so excited to be able to bring Alexis in as our keynote speaker and we will also be screening Whose Streets? during the conference, too.”

In a March 28 Letter to the Editor published in The Observer, Hascher and Prestage emphasized the importance of the conversations that will take place during the conference, which takes place just 10 days after the 50th anniversary of Dr. Martin Luther King Jr.'s assassination on April 4, 1968.

"Cornel West writes, 'America … needs citizens who love it enough to re-imagine and re-make it,' and we think the same can be said about our Notre Dame community. Join us as we re-imagine and re-make the world to become one in which the ideals King fought for and dedicated his life to are actualized," they wrote.