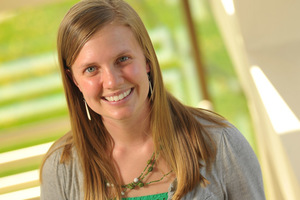 Notre Dame senior Jenna Knapp, an anthropology and peace studies major, has won a $10,000 grant for a project she designed to improve disaster prevention efforts in an agrarian region of El Salvador.

The project will be funded by the Davis Projects for Peace, which sponsors grassroots projects designed by college students to promote peace. Knapp will lead a delegation of Notre Dame engineering and peace studies students to the region of Santiago Texacuangos, whose agricultural crops were destroyed by Hurricane Ida in November 2009.

Student delegates will participate in community-led disaster prevention workshops and reconstruction efforts that include creating terraced soil and planting native izote plants between crops, which helps prevent mudslides in the wake of natural disasters.

Research shows that communities without dependable livelihoods are more susceptible to violent conflict.

“When people think of peace, they immediately think of active conflicts,” said Knapp, who will graduate from Notre Dame in May. “But structural violence, such as economic imbalance and unequal access to resources, plants the seeds for conflict years before it erupts."

Santiago Texacuangos is susceptible to such violence, Knapp said, because its residents were displaced to the area as refugees during El Salvador’s civil war, which took place from 1980 to 1992.  The region’s landscape, which had been largely deforested to make way for development projects, was not well-equipped to sustain agriculture on a long-term basis.

Knapp hopes the students’ 10 days in El Salvador will increase their understanding of the roots of violent conflict.

“This experience can help them work for peace in whatever field they end up,” she said.

After graduating, Knapp will spend a year in El Salvador researching gang violence prevention and rehabilitation. Her research is supported by a Fulbright Fellowship.