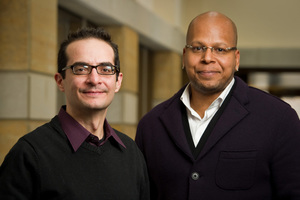 Kroc Institute professors Christian Davenport and Ernesto Verdeja have been awarded a grant from Notre Dame’s Faculty Research Support Program for research that aims to reduce state repression – from murder to torture to police brutality and surveillance abuse – around the globe.

State repression is widespread, Verdeja says, and it persists despite growing levels of democratization.

"The commonly held assumption that government abuse is less severe in more democratic countries is not uniformly true,” Verdeja says. “In fact we don’t know what specific factors lead police, armed forces, intelligence services, and paramilitary groups to abuse their own people.”

Verdeja says the grant will not only generate new knowledge but also recommendations for human rights activists, practitioners, and policymakers.

“We hope we can contribute directly to security reform, eventually limiting the coercive power of the state,” he says.

Davenport is professor of peace studies, political science and sociology. His research interests include political conflict, violence, and violations of human rights. He is the author of State Repression and the Domestic Democratic Peace (Cambridge University Press). Verdeja is assistant professor of political science and peace studies. His research focuses on large-scale political violence such as genocide, war crimes, and crimes against humanity. He is the author of Unchopping a Tree: Reconciliation in the Aftermath of Political Violence (Temple University Press).