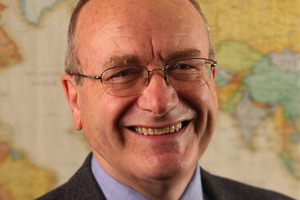 Since the end of the Cold War, hundreds of peace agreements have been signed by combatants engaged in violent conflicts around the world. Many have failed before the ink has dried – but others have resulted in lasting peace. What makes the difference? And how can we improve the chances that a peace process will succeed?

To help answer these questions, the University of Notre Dame’s Kroc Institute for International Peace Studies is developing the Peace Accords Matrix – the world’s largest source of comparative data on peace agreements. When complete, the matrix will be an interactive online resource for scholars, negotiators, journalists and peacebuilders worldwide.

With a grant from the United States Institute of Peace, Kroc Institute faculty and graduate students are compiling data for the project, the first phase of which is expected to be online before the end of the year.

The matrix will serve as a gateway into a voluminous and often confusing array of materials on peace processes and peace accords, said John Darby, professor of comparative ethnic studies at the Kroc Institute and the director of the project.

“Despite an increase in scholarly activity on peace negotiations and peace processes, it’s very difficult to compare peace agreements, because the material is so scattered across international and disciplinary boundaries,” Darby said. “The matrix will turn a vast amount of information into a powerful and evolving tool for peace research.”

Matrix users will be able to sort data and compare and contrast issues such as electoral reform, demilitarization or war crimes as presented in peace agreements, Darby said. For example, a researcher or negotiator can weigh the relative success of peace accords that call for integrating ex-militants into the police force after a war (as happened in South Africa and Kosovo) versus those that prescribe overhauling and reforming the entire police force (as was the case in Northern Ireland and Guatemala). Eventually, users also will read the latest news and events related to peace agreements and post questions and comments on a blog or discussion forum.

The matrix is a key component of a broader global research initiative on peace accords that is a partnership between the Kroc Institute and the Conflict Data Program of Uppsala University in Sweden.

Darby, an expert on ethnic conflict and a native of Ireland, joined the Kroc Institute in 1999. He is the author or editor of 14 books, including “Violence and Reconstruction,” “Peacebuilding after Peace Accords,” “Contemporary Peacemaking,” “Guns and Government,”  “The Management of Peace Processes,” “The Effects of Violence on Peace Processes” and more than 100 other academic publications.