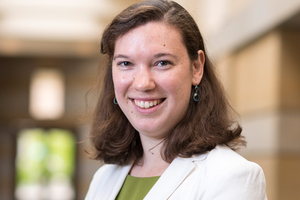 Sarah Crane is a Ph.D. candidate in Peace Studies & History. She spent the last year in Germany on a Fulbright scholarship for her research on how post-Holocaust trials shaped the post-war identity of German democracy. Sarah is preparing for another stage of her research in Israel where she will look into the ways these trials influenced the country and contemporary Israelis. In this Student Q&A, Sarah explains why she chose to study Peace and what she hopes to achieve through her research.

My focus of study is centered around examining the Holocaust's influence on the current norms and values of international justice. I began this research not with an interest in the Holocaust specifically, but instead wanting to understand why the crime of genocide holds so much weight within the global discourse on our responsibility to respond to and prevent future atrocities. I began this research when I was living among the Tibetan Refugee Community of Dharamsala, India, and learned about this community's goal of garnering international support for recognizing the crimes committed in Tibet as "cultural genocide." Though it became clear that it was very unlikely that China would ever be formerly convicted for genocide in an international court, a conviction seemed less important to this community than the moral recognition that what many of them experienced, and were still experiencing, amounted to cultural genocide. I left wanting to understand why the label of "cultural genocide" was so important to this community. Research into the origins of the crime of genocide both in international law and within global discourse led me to the crimes of the Holocaust. I decided I wanted to focus on legal responses to the Holocaust to better understand the moral and legal responsibility embedded within the international community's commitment to "never again."

What are you focusing on during your Ph.D.?

My dissertation focuses on two trials specifically, the trial of Adolf Eichmann in Israel (1961), and the Frankfurt-Auschwitz Trial in Germany (1963-1965). Both of these trials placed former members of the Nazi regime on trial, but did so many years after the end of WWII. I study the motivations behind initiating these trials almost two decades after the fall of the Third Reich: what can be gained by putting someone on trial even decades after the crimes they committed? I found that the instigators of both trials saw a conviction as subsidiary to the effect that they hoped the trial would have on their country's collective memory of the Holocaust. They both saw reckoning with the past as an essential step in not only ensuring the long-term stability of both Israel and Germany, but making sure that the crimes of the Holocaust do not happen again. My research aims to connect their goals and motivations to the current discourse on international justice.

Describe your experience in Germany.

From September 2021 until July 2022, I was a visiting Fulbright Scholar at the Fritz Bauer Institut in Frankfurt, Germany. This Institute was founded as a research center on the history and impact of the Holocaust and is named after the instigator of the Frankfurt-Auschwitz Trial, Fritz Bauer. I first got in touch with the Institute when I was trying to find examples of Fritz Bauer's articles, speeches, and interviews regarding the Auschwitz Trial and postwar Germany's confrontation with its Nazi past. I was immediately impressed by their extensive archive as well as the caliber of cutting-edge research that they publish on the Holocaust. My goal for this year was to understand Fritz Bauer's goals for the Auschwitz Trial within the German legal and intellectual tradition that he was raised in, as well as explore how German language historiography articulates his legacy. Though I have read the English language literature on the Frankfurt-Auschwitz Trial and the Holocaust, understanding these events in a different language and within a different academic framework was challenging. I found I had to lean on many of my colleagues in the Institute to understand not only where to start, but get help with processing what I found along the way.

What are your next professional steps and goals?

I left Germany with a greater appreciation for pursuing grounded historical research that is not only focused on the remnants of past people and events that are found in archives, but how the legacies of those figures/events are continually constructed and reconstructed throughout a country's history. My next phase of research is focused on looking at the instigators of the Eichmann Trial, former Israeli Prime Minister David Ben-Gurion and Chief Prosecutor Gideon Hausner. I will be traveling to Israel in January to pursue archival research on these two figures, and similar to my time in Germany, my goal is to spend time with Israeli academics who can help me engage with the impact of the Eichmann Trial on contemporary Israel. I hope to leave my time in Israel with a clear sense of how both the Eichmann and Auschwitz Trials influenced the international community's understanding of trials as not only legal exercises, but institutions that influence our collective understanding of our responsibility to remember and respond to past atrocities.