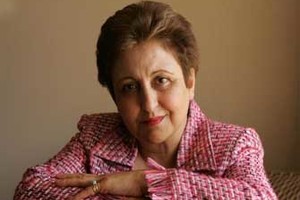 UPDATE 3/20: Please note that this talk has been rescheduled from its original date and ticket holders must exchange their tickets. Please see below for additional details and call the ticket office at (574) 631-2800 as soon as possible to get new tickets.

Shirin Ebadi, a lawyer, human rights activist, and recipient of the 2003 Nobel Peace Prize, will deliver the 15th annual Rev. Theodore M. Hesburgh, C.S.C., Lectures in Ethics and Public Policy at 12:30 p.m. on April 23 (Thursday) in the DeBartolo Performing Arts Center at the University of Notre Dame.  She will address "Human Rights in the Islamic World."

The first Iranian, and the first Muslim woman, to win the Nobel Peace Prize, Ebadi has been recognized for her work defending women and children’s rights in Iran and for advocating an interpretation of Islam that is compatible with democracy and human rights.

Ebadi received a law degree from the University of Tehran in 1965. She became one of the first female judges in Iran. In 1975, she was the first Iranian woman to preside over a legislative court.  Following the Islamic Revolution in 1979, when women were deemed unfit to serve as judges, Ebadi was demoted to the position of a clerk. She resigned, and although her application was repeatedly rejected, she eventually obtained a license to open a law firm.

For the next two decades, Ebadi devoted her life to the promotion of women’s rights and the defense of children and political activists. Her organization, the Association for Human Rights Advocates, provides pro bono legal service to political prisoners in Iran.

Ebadi has spoken out strongly against discrimination and injustice in her country, at times despite great risk to her own safety. In 2000, she spent a month in solitary confinement as a result of defending the family of a student killed by the police in protests in Tehran. She favors dialogue as the best path to changing attitudes and resolving conflict. As a conscientious Muslim, she believes there is no conflict between Islam and fundamental human rights.

Ebadi is the founder of three non-governmental organizations in Iran: The Association for the Defense of the Rights of the Child, the Association for Human Rights Advocates, and the Organization against Mines in Iran. She is the author of 14 books, including Iran Awakening: A Memoir of Revolution and Hope (2006).

The annual Hesburgh Lectures were established by the Kroc Institute for International Peace Studies in honor of the Rev. Theodore M. Hesburgh, C.S.C., president emeritus of Notre Dame.