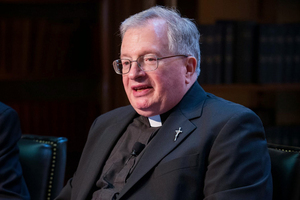 The Kroc Institute mourns the passing of one of its earliest leaders, the Rev. Andrew (Drew) J. Christiansen, S.J. He passed away on Wednesday, April 6, 2022, at the age of 77.

Most recently he served as a Distinguished Professor of Ethics and Human Development in Georgetown’s School of Foreign Service and as a senior fellow at Georgetown’s Berkley Center for Religion, Peace, and World Affairs. Fr. Drew was also a frequent consultant to the Holy See and a member of the steering committee of the Catholic Peacebuilding Network, whose secretariat is hosted by the Kroc Institute.

Below are some reflections from Kroc Institute faculty members who worked alongside Drew.

Drew Christiansen was a key early Kroc Institute colleague back in the days when all the peace studies faculty and staff could fit in a small conference room. He brought a great combination of sharp analysis, a deep commitment to justice, and warm human connections.

As the peace studies curriculum was developed, he was always aware of the needs of our unique group of international students: ready to challenge them, learn from them, and support them. Students remember that he asked incisive questions, and comments in class discussions merited his full attention and thoughtful responses.

Drew's ready smile and warm sense of humor brightened the office. The Kroc Institute owes a debt of gratitude to the energy, insight and compassion he brought to our earliest years.

Among Drew Christiansen’s many gifts to us, one that may not have been widely known or appreciated was the extent to which he was far ahead of his time in understanding the inseparable relevance of peace research to Christian theology and of theology to peacebuilding. Even if this was not appreciated by disciplinary purists, his interdisciplinary worldview reinforced, at the moment of the Kroc Institute’s origin, the foundation that shaped our entire undergraduate and master’s level curriculum. Years later, that foundation also led us quite naturally to establish an interdisciplinary Ph.D. degree in Theology and Peace Studies, one that generates added value to doctoral work in both theology and peacebuilding, not a watering down of expertise in either area.

Drew had a gift for expressing his penetrating, analytical mind with sufficient kindness that one looked forward to talking with him and learning his insights on ethical issues which, he pointed out, lie behind every major political issue.

He picked up and further developed the regular conversations between peace studies and ROTC faculty. He also eventually led what became a very successful undergraduate course on war, law, and ethics in which students of diverse backgrounds worked together to understand how humanity needed to address the threats posed by weapons of mass destruction

At a time when the Kroc Institute was just beginning and had less than a handful of faculty, its future life was not at all assured, but its early health was helped enormously by Drew’s deep twofold commitment to (1) justice and peace, which animated all his teaching and research, and (2) scholarly excellence. He also recognized that some scholarship would be policy relevant and contribute to public policy debate at a time when that view may not have been widely shared outside the Kroc Institute.

His life and work demonstrated for us and for all who knew him that lived religious commitments lead naturally and assuredly into efforts to transform the local, national, and global political order into a new creation shaped by compassion and moving toward justice and peace.

There's no question that Drew was a critical and founding leg of the four-legged stool of Anne Hayner, Bob Johnansen, and myself from the founding of Kroc. Drew's hiring in theology as a Christian ethicist with particular emphasis on the newly emerged Catholic thinking about nuclear weapons and war, was part of what a now long-retired theology colleague called at the time, an “ecumenical moment in the department.”

Drew championed and volunteered to edit a newsletter of Kroc activities that would go to every faculty person in the law school and the College of Arts and Letters, as well as to the emerging faculty fellows group across other colleges.

Drew was also deeply involved with our efforts to feed more and more “peace related” materials into what then was the required sophomore core course for the College of Arts and Letters. He and I worked together to run Friday afternoon faculty workshops, providing substantive and pedagogical suggestions about books that we had pushed through the core course committee.

Meanwhile his own research work continued, part of which was his engagement with nuclear specialists in the laboratories in the southwest of the U.S., alongside specialists at Stanford and colleagues at Georgetown regarding nuclear ethics questions.

Jerry [Powers], I, and others very much valued Drew’s connection to and commitment to the Catholic Peacebuilding Network’s program to develop a new generation of Catholic leaders involved in nuclear policy. And, even amidst his recent health struggles, he stimulated the forming of a group of Georgetown undergrads focused on these questions.

When he was at America magazine, he continued to prod me to write on ethics related to the use of force in the post 9-11 world and I know he gave various opportunities to others.  Personally, I would not have ventured so far into the ethical area on some of these issues without having learned so much from Drew: both in substance and in stylistic ways to discuss these topics.

I am just one of many who considered him their best – and most demanding! – teacher. I have spent two decades as a professor trying to be for my students what Drew was for me. He was a student’s teacher. He cherished his students and challenged us to do and be our best. He inspired me and a generation of young people at the Jesuit School of Theology at Berkley, the University of Notre Dame, and Georgetown University to embrace our Christian vocation to transform the social order in light of the Gospel.

A renowned Catholic social ethicist and prolific writer, he made significant contributions to Catholic thought on the Catholic Church and international affairs; the ethics of nuclear weapons, war, and peacebuilding; and environmental ethics.

He was not content to be an excellent teacher and scholar, however. Much of his life was dedicated to efforts to contribute to the policy debate on pressing issues of justice and peace.

In recent years, much of his time was devoted to nuclear disarmament. He helped lead CPN’s Project on Revitalizing Catholic Engagement on Nuclear Disarmament. He organized Georgetown’s delegation of faculty and students who attended the Vatican conference on disarmament in November 2017, and co-edited the publication of the proceedings of that conference. He hosted numerous other events on nuclear disarmament. He also advised the Holy See on nuclear weapons issues. He was especially proud to serve on the Holy See’s delegation during the negotiations of the historic Treaty on the Prohibition of Nuclear Weapons.