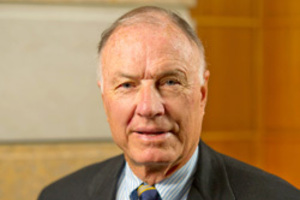 Known to his countless friends as "Jack," he lived a long life of public service. Jack had a distinguished career as a vice president at Johnson & Johnson and lent his time and leadership to various philanthropic and humanitarian causes. Along with sitting on the Kroc Institute’s Advisory Council and Board, Jack also chaired the advisory board of the New York Blood Center, the New Jersey Alliance for Action, the New Community Foundation in Newark, New Jersey, and the National Alliance to Prevent Blindness-New Jersey, among other organizations.

Born and raised in Westfield, New Jersey, he spent his summers as a lifeguard on Jenkinson's in Point Pleasant Beach, New Jersey where he met his future wife, Diane. He graduated from Westfield High School and attended the University of Notre Dame in South Bend, Indiana. Following two years of undergraduate studies there he studied law at St. John's University in Jamaica, New York graduating in 1954. He later received an honorary degree from Notre Dame.

Admitted to the state bars of New Jersey, New York, and Virginia, he briefly worked in private law practice in New York City before enlisting in the United States Naval Reserves, serving active duty as a Naval Line Officer with an emphasis on legal duties.

Following his discharge, he spent two years as a law secretary for the Honorable Frederick W. Hall in the New Jersey Appellate Division and New Jersey Supreme Court.

He joined Johnson & Johnson as a member of the law department in 1960. He was vice president of personnel and a member of the board of directors at the company's Ethicon, Inc., before his appointment in 1972 as vice president of corporate relations at Johnson & Johnson. In that role, he was responsible for government affairs programs at the local, state, and federal levels. He also served two terms as a freeholder in Somerset County.

Later on in his Johnson & Johnson career, he focused on international relations, traveling to Russia with his wife Diane in the waning years of the Soviet Union and working on philanthropic and environmental initiatives in the emerging democracies in Central and Eastern Europe. He also chaired the Canada-United States Relations Committee and the Transatlantic Policy Network and served as a member of the international advisory committee for Project HOPE, a global health and humanitarian nonprofit organization. After retiring from  Johnson & Johnson, he started an international business consultancy, JRM International.

A faithful Catholic who believed deeply in the power of prayer and the God-given dignity of every person, he served his Church in numerous capacities. He was a member of the board of trustees of St. Peter's Hospital in New Brunswick, Delbarton School in Morristown, New Jersey, and Glenstal School, in Limerick, Ireland, and led capital campaigns for the Diocese of Metuchen. He was a member of the Knights of Malta.

Anyone who knew Jack even casually was aware of his special devotion to the University of Notre Dame - and to its longtime president, the Rev. Theodore M. Hesburgh, who over the years became a close friend and confidante. Regrettably bypassed as a candidate for head football coach of the Fighting Irish, he found other ways to champion his alma mater, first as a local alumni club leader and later as a member of the university's business school and public affairs advisory councils.

He dedicated much of his final years of active public service to the Kroc Institute for International Peace Studies. In 2008 he and his family established the John R. and Diane Mullen Family Endowment to provide ongoing support for two Ph.D. fellowships at the institute, one of the world's leading centers for the study of the causes of violent conflict and strategies for sustainable peace.

"The world is in a frightening situation right now, and the Kroc Institute can make a big difference," he said at the time. "We were not put on the earth to be complacent, but to be apostles of peace." His daughter Paddy Mullen (B.A. ‘80)  succeeded him as chair of Kroc Institute's advisory board earlier this year.

He was predeceased by his wife of 53 years, Diane Macom Mullen, a former fashion model in New York City; their infant son, John R. Mullen Jr.; his parents, Thomas and Gertrude Mullen, and his sister and brothers, Gertrude Parizeau, Thomas Mullen, and Laurence Mullen. He is survived by his wife, Fran Metzger Mullen, of Longmont, Colorado; and his children: Michael K. Mullen and his partner Lydia Nadeau, of Morristown, New Jersey; Paddy Mullen, of New York City; Neilli Mullen Walsh and her husband Peter, of Wilmington, Delaware; Shannon P. Mullen and his wife Eileen, of Brick, New Jersey; and Killeen Mullen, of New York City.

In the years to come, they will draw inspiration from his wonderful example of humor, faith, compassion, and service, as well as from his personal call-to-action: "Get tough, Irish!.