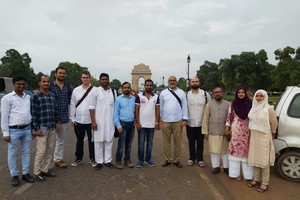 After three years of in-depth study and coursework covering history, science, theology, and the application of new research methodologies, the first group of young Islamic studies scholars to participate in the Madrasa Discourses program said their goodbyes during the July 2019 Madrasa Discourses Summer Intensives in India and Pakistan.

These Indian and Pakistani religious leaders now take new modes of inquiry to address modern questions back to their work as professors, community spiritual leaders, journalists, and advanced doctoral students. Their final research papers focused on topics including Islamic bioethics and techno-scientific human enhancement, evaluations of the application of the Islamic penal code, and the concept of human dignity in Islam. Their papers tread new ground for their intellectual communities, reflecting not only new capabilities in interpretation, but also a willingness to engage modern concerns that is rippling outward into madrasa-educated circles.

This year’s summer intensives took place from July 14-19 in Murree and Islamabad, Pakistan, and July 23-27 in New Delhi, India.

In addition to discussions among students and faculty, the 2019 Madrasa Discourses Summer Intensive also presented the work of the project to diverse local communities. At a July 18 event at the Council of Islamic Ideology in Islamabad, 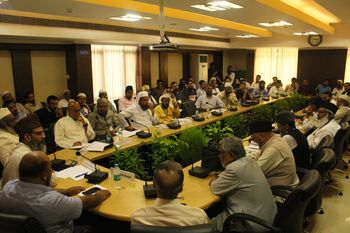 Ebrahim Moosa, primary investigator for madrasa discourses and professor of Islamic studies at the Keough School of Global Affairs, presented on his research. The event also included additional panel discussions and conversation. The event drew over 100 theologians and religious scholars.

Moosa and Joshua Lupo, Madrasa Discourses classroom coordinator, visited widely with ulema (religious scholars) at key Islamic learning centers in Delhi such as the Deoband Old Boys Organization. They were also joined on this visit by lead faculty members for the project: Waris Mazhari in India and Ammar Khan Nasir in Pakistan. Through these visits and panel discussions, the Madrasa Discourses project deepened relationships with the individuals and institutions crafting curricula for the next generation of Islamic religious scholars and practitioners.

The Madrasa Discourses project is made possible through the generous support of the John Templeton Foundation, and is housed at the Kroc Institute for International Peace Studies, part of the University of Notre Dame's Keough School.