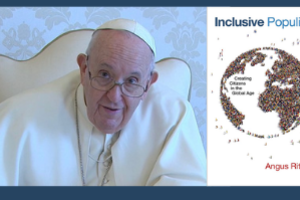 During the international “A Politics Rooted in the People” online conference on April 15, 2021, sponsored by the Centre for Theology & Community in partnership with Catholic institutions in the United States, European Union, and United Kingdom, Pope Francis spoke to grassroots Catholics, community organizers, and academics to take forward His Holiness’s remarkable call for the Church to embrace “a politics rooted in the people,” with a focus on broad-based organizing and “popular movements.”

During Pope Francis' Address, he said that “the true response to the rise of populism is not exactly more individualism but quite the opposite: a politics of fraternity, rooted in the life of the people.” The Pontiff goes on to say, “In his recent book [Inclusive Populism: Creating Citizens in the Global Age], Rev. Angus Ritchie calls this politics that you do ‘inclusive populism’; I like to use the term ‘popularism’ to express the same idea. But what matters is not the name but the vision, which is the same: it is about finding the means to guarantee a life for all people that is worthy of being called human, a life capable of cultivating virtue and forging new bonds.”

In the preface to Inclusive Populism, Ritchie says that what should give us hope is not just a new theory of pluralism. “Rather,” he argues, “we should be encouraged by the practice of so many citizens in our most deprived and diverse neighborhoods. Their actions show that strangers can indeed become fellow citizens, learning to trust and care for one another, and so to build a more just and peaceful common life.”

Inclusive Populism received a Catholic Press Association Book Award in 2020 for Faithful Citizenship/ Religious Freedom. The book is part of the Contending Modernities series at the Kroc Institute for International Peace Studies, part of the Keough School of Global Affairs. The series is edited by Kroc Institute faculty members Ebrahim Moosa and Atalia Omer, and Scott Appleby, the Marilyn Keough Dean of the Keough School.

Originally published by Kathryn Pitts at undpressnews.nd.edu on April 15, 2021.