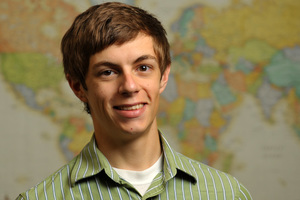 Douglas Ansel, a Ph.D. candidate in political science and peace studies, has received a three-year graduate research fellowship from the National Science Foundation (NSF) to study the impact of elections and political agreements in countries emerging from civil wars.

Ansel will first focus his efforts on building a database that catalogues electoral systems and elections in countries that have experienced civil wars since 1945. Later, he will compile in-depth case studies examining several of these countries.

A variety of factors influence the stability of peace and the prospects for democracy in the wake of a civil war, Ansel said. Political institutions, especially electoral systems, are one such factor. For example, the timing of post-conflict elections, the sequencing of local and national elections, and international intervention all can affect the stability of a peace agreement and the strength of a post-conflict democracy.

“If we can learn how to design constitutions for countries that have experienced violent conflict, we can reduce the risk of countries experiencing renewed violence,” Ansel said.