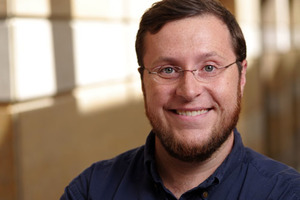 Garrett’s research interests include the interplay between operative theories of justice and historical processes of transitional and post-conflict justice; the role of (underrepresented) religious actors, communities, and institutions in the conceptualization and implementation of peacebuilding; and genealogical investigation into the translation of religious resources of meaning into political violence and processes of peacebuilding.

Prior to his doctoral studies, Garrett served as the head of development for the International Physicians for the Prevention of Nuclear War, a Nobel Peace Prize-winning non-governmental organization dedicated to nuclear abolition and armed violence reduction. He holds an M.T.S. in Religion, Ethics, and Politics from the Harvard Divinity School, and a B.A. in Religious Studies and Peace & Conflict Studies from Guilford College in Greensboro, N.C.

The John and Judy Scully Fellowship is a result of a generous donation by the Scullys, longtime supporters and advisors of the Kroc Institute.