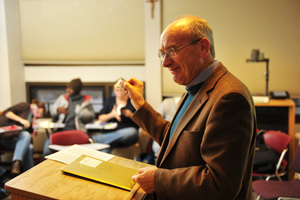 A fund established by the Kroc Institute’s Advisory Council in 2010 to support fellowships for doctoral students in peace studies has been named in memory of John Darby, professor of comparative ethnic studies at Notre Dame from 1999 until his death in June 2012.

Once the fund is fully endowed, the revenue it generates will support “Darby Fellows,” doctoral students in peace studies, in particular those who will carry on the important work in peace processes to which Professor Darby was dedicated.

Kroc Director Scott Appleby announced the naming of the fund at a gathering in honor of Professor Darby attended by his widow Marie Darby, her sister Katherine, and close friends and colleagues at Notre Dame. Fellowships bearing Darby's name are especially appropriate, Appleby said, given Professor Darby’s devotion to teaching and mentoring students.

From 2002-06, Professor Darby directed a major Kroc Institute research initiative on ethnic conflict — by far the world’s most common type of violent conflict — that resulted in a substantial body of scholarly and practical work. In 2004, he founded and directed the Peace Accords Matrix (PAM) a unique database and tool for research and peacebuilding, which remains central to Professor Darby’s legacy at the Kroc Institute and worldwide.