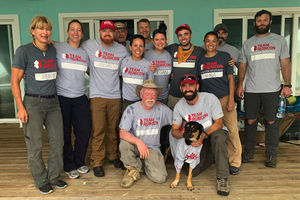 Richard “Drew” Marcantonio, a current doctoral student in peace studies and anthropology, has received a prestigious three-year Dolores Zohrab Liebmann Fellowship. Although the Fellowship does not directly fund research, it provides tuition and stipend support for Marcantonio, enabling his ongoing research on human-produced pollution and environmental violence in the United States and, more broadly, in the global ecosystem.

Marcantonio is studying this toxic and non-toxic pollution from its sources through to its outlet and eventual impact on everyday life.

Although the definition of “environmental violence” is debated, Marcantonio defines it as “human-produced pollution that harms humans.”

While a lot of research on climate change and environmental violence focuses specifically on impacts to nature, Marcantonio is focusing on the impact of environmental violence on humans. He hopes this focus will allow for his research to have more influence on policy making institutions like the United States Environmental Protection Agency, whose mission includes protecting both human health and the environment. Marcantonio notes that more humans die as a result of toxic and non-toxic pollution than from any other human-produced phenomena, including war and direct violence.

“My interest is in the whole host of ways that human-produced pollution harms people as they go about their everyday lives,” says Marcantonio. “Climate change is one tree in a big forest. When you produce greenhouse gas emissions, you are also producing a host of other pollutants that are harming people in other direct and indirect ways, too.”

To conduct research, Marcantonio is partnering with Team Rubicon, an organization that utilizes the skills of military veterans and sends them as first responders to environmental disasters in the United States. These disasters are often the results of non-toxic pollution driving extreme weather events.

Marcantonio accompanies first response teams and conducts interviews with individuals affected by these disasters and receiving services from Team Rubicon. In addition, Team Rubicon provides data sets to Marcantonio that track levels of destruction in the disaster sites that he visits.

“When I interview people who are receiving relief services, I’m interested in discerning, what everyday activities have been interrupted and would it take for people to recover on their own?” says Marcantonio. “And after I interview them, I join the Team Rubicon crew and work on their house.”

In addition to the U.S.-based research supported by the Liebmann Fellowship, Marcantonio also is engaged in Sierra Leone where he studies the impact of toxic pollution from gold mining.

In interviews across these very different cultural contexts, Marcantonio has begun to see global trends emerging about the ways people’s everyday lives are affected by human-produced pollution.

For example, in many areas facing destructive results of pollution, finding ways to do laundry can be difficult: in Sierra Leone, high levels of silt in the river from mining runoff makes usual methods of washing clothes difficult, while individuals in Hawaii who were impacted by natural disasters have also struggled to figure out systems for doing laundry by hand without any equipment, electricity or easily accessible water sources. Pollution-related crises also impact people’s ability to go to work and expand the economic cost of environmental disasters.

“Often what I’m seeing is that in diverse locations it’s the same practices or habits that are identified as needing to be adapted to fit the new environmental realities we find ourselves in,” said Marcantonio. “That’s the everyday life piece that doesn’t come out in traditional environmental violence data sets. How do you measure the extra 15 minutes a day you have to spend fetching water to do laundry by hand or other forced adaptations that we know really affect people’s ability to go about their lives?”

The Ph.D. Program in Peace Studies is administered by the University of Notre Dame’s Kroc Institute for International Peace Studies, part of the Keough School of Global Affairs. The program is a partnership with the Departments of Anthropology, History, Political Science, Sociology, Psychology, and Theology.