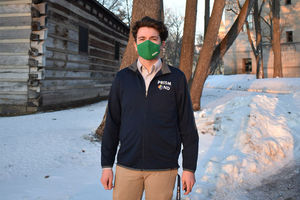 Notre Dame junior Matthew Bisner has been elected undergraduate student body vice president for the 2021-22 academic year. Bisner and his running mate, Allan Njomo, won with 51.18% of the votes in an election that saw the highest student voter turnout in three years, according to The Observer, Notre Dame’s student-run newspaper. Bisner, a political science major with a supplementary major in peace studies and minor in gender studies, is the eighth peace studies student to be elected student body president or vice president since 2012.

Bisner is no stranger to student government, having worked for two years as a member of the judicial council. This role involved familiarizing himself with the Student Union constitution in order to ensure that student body elections were fair and accessible to all Notre Dame students.

“We have to maintain the integrity of the system,” said Bisner. “Election regulations are the longest part of the Student Union constitution. Maintaining faith in democratic institutions is the backdrop of this work. If you don’t have faith in student elections, you’re going to have less faith on other levels, including local, state and national elections.”

Bisner decided to campaign this spring after realizing how important service to the Notre Dame student body has been throughout his time on campus. When the COVID-19 pandemic prevented students from returning to campus after spring break in March 2020, Bisner was instrumental in helping to create a spreadsheet that coordinated a network of students, faculty, staff (from Notre Dame, Saint Mary’s, and Holy Cross), and community members to share resources and support one another through the difficult transition. The spreadsheet allowed students in need of housing or food to contact providers directly, and its announcements page allowed anyone in the community to inform students about deals on transportation, storage, nutrition options, free internet, and more.

“That experience was one of the most challenging things I’ve taken on, but also one of the most fulfilling experiences I’ve had,'' said Bisner. “It made me realize that I was really fulfilled by service to the student body.”

Bisner and Njomo ran on a wide-ranging platform, but Bisner cites two “passion projects” that he is especially excited to jump into once he begins his term as VP and where he sees the influence of his peace studies training. The projects include expanding access to sexual health resources on campus and looking at Student Union reform to help revitalize student government structure to make it more accessible.

Bisner also saw the influence of peace studies in the way he and Njomo chose to run their campaign, taking a grassroots approach and talking with students to identify priorities and needs across the study body.

“There is honestly no part of our platform that peace studies hasn’t touched,” said Bisner. “It is grounded in a relational approach to leadership and building relationships among administrators and Student Union leaders, as well as better understanding the ND community as situated in the South Bend community.”

Other peace studies students elected to top leadership roles in recent years include:

The Kroc Institute for International Peace Studies is home to the Undergraduate Program in Peace Studies, offering a supplementary major and minor in peace studies, as well as a number of co-curricular activities, including the Notre Dame Student Peace Conference.