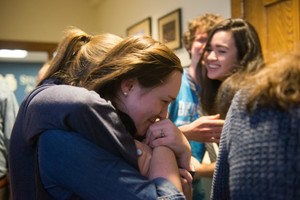 Elizabeth Boyle embraces a supporter following news of her victory. Photo by Anna Mason for The Observer

Boyle and student body vice president-elect, Patrick McGuire, will take office on April 1. Boyle credits her peace studies training, as well as the example set by former peace studies student government leaders, with preparing her for this new role.

“My peace studies classes have provided me with a holistic education that has taught me how to be a better student, a better citizen of the world, and a better leader,” said Boyle. “Peace studies has taught me how to have difficult conversations about topics that may be uncomfortable, how to engage with those who have very different beliefs than I do, and how to always treat others with compassion and respect while simultaneously working toward resolution.”

As a sophomore, Boyle took Professor David Cortright’s class, “How to Change the World,” and was inspired to pay more attention to the issues of sexual assault and violence on the Notre Dame campus. She took action by developing “Stand 4 IX,” a campaign asking Notre Dame to commit to honoring previous federal Title IX guidelines that were stricter than those implemented in 2017 by Secretary of Education, Betsy DeVos.

“It was after the success of this campaign and [after] I saw that nonviolent social movements can have a positive impact on the lives of students that I started to consider a run for Student Body President,” said Boyle. “Every strategy that I employed in this campaign, every meeting that I had, or Observer piece that I wrote was informed by the lessons that I learned in my peace studies classes.”

Boyle was also selected to attend the 2018 Madrasa Discourses Intensive Programs in Dhulikhel, Nepal, in July and Doha, Qatar, in December. The Intensives brought together Notre Dame faculty and students with madrasa graduates from India and Pakistan for two weeks of intensive learning and dialogue about citizenship, religion, and society in a rapidly-changing world.

Boyle hopes this new student government leadership opportunity will help equip her for a career in public service. Last summer, she interned with USAID and has plans to work with the U.S. Department of State this summer, both opportunities that fit her post-graduation goal of going to graduate school to study global governance and religion.

“My role as Student Body President will prepare me well for a career in public service,” she said. “It will teach me how to negotiate, lead, propose policy, and organize a large group of diverse constituents.”

Other peace studies students elected to top leadership roles in recent years include: