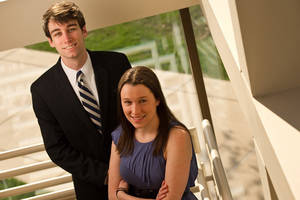 Notre Dame seniors Melissa Wrapp and Patrick McCormick have been named recipients of the Kroc Institute’s 2012 Yarrow Award, given annually to undergraduates who demonstrate academic excellence and commitment to service in peace studies.

“While maintaining stellar academic records, these students distinguished themselves with the quantity and quality of their service experiences and exemplary critical reflections on those experiences,” said George A. Lopez, director of undergraduate studies at the Kroc Institute and the Rev. Theodore M. Hesburgh, C.S.C. Professor of Peace Studies, who chairs the award selection committee.

Wrapp interned with the Orange County (Calif.) Catholic Worker community through the Center for Social Concerns’ Summer Service Learning Program. While working as an intern, she conducted independent ethnographic fieldwork among the city’s homeless and low-income populations, exploring issues of immigration, identity, and media coverage.

After receiving a grant from Notre Dame’s Undergraduate Research Opportunity Program, Wrapp presented her research at the annual meeting of the Society for Applied Anthropology. While studying in London through Notre Dame’s London Summer Program, she conducted research on the practice of squatting in London, which formed the basis for her senior anthropology honors thesis. Wrapp also serves as vice president of Notre Dame’s Habitat for Humanity chapter. After graduation, she plans to pursue graduate studies in anthropology.

McCormick, working with the university’s Office of Sustainability, served as student co-chair of a national conference on sustainability and justice. Through Notre Dame’s Center for Social Concerns, he organized a university-wide rally and basketball tournament to advocate for peace in Sudan.

McCormick also led the development of the West Side Food Security Coalition, a group dedicated to bringing fresh foods to low-income areas in South Bend. He has interned at the Bipartisan Policy Center in Washington, D.C. and in Johannesburg, South Africa, where he worked for a foundation that supports the resettlement of refugees. He currently serves as Notre Dame student body president. After graduating from Notre Dame, McCormick plans to pursue a master’s degree in migration studies and a degree in law.