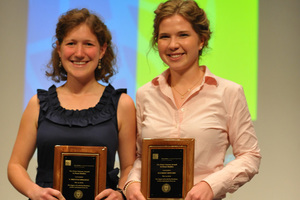 The Yarrow Award is given annually to senior undergraduate peace studies students who demonstrate academic excellence and commitment to service work in peace studies. Bollman and Howard were honored on May 15 at the Kroc Institute’s closing ceremony.

Bollman served as a research assistant in Notre Dame’s Haiti Program for the Elimination of Lymphatic Filariasis. She also participated in the University’s Summer Service Learning Program, working at a women’s emergency shelter in Rochester, New York, and teaching courses on world affairs to university students in Cambodia. At Notre Dame, she initiated an academic course on humanistic medicine.

She plans to attend medical school at Harvard University.

As a student, Howard received several research grants, which she used to conduct field work in Uganda.  Her research resulted in a senior thesis that received two academic prizes from the Department of Political Science: the Stephen Kertesz Prize for the best senior thesis in international relations and the Gary F. Barnabo Political Science Writing Award.

Howard has worked as an intern for a member of the British Parliament and for the African Network for the Prevention and Protection against Child Abuse and Neglect in Jinja, Uganda.  She hopes to work for an organization that promotes human rights.