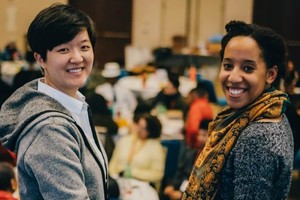 Two alumni of the University of Notre Dame peace studies program are putting the tools they learned in the classroom to work on campuses around the country. In March 2015, Deandra Cadet (B.A., peace studies and political science, ’15) and Taeyin ChoGlueck (B.A., peace studies and sociology, ’14) officially launched InterAction, a South Bend-based nonprofit organization that uses counter-storytelling and the arts to explore issues of identity and intersectional justice.

During her time at Notre Dame, ChoGlueck was one of the co-founders and director of Show Some Skin, a social justice theater production that “gives voice to unspoken stories about identity and difference” by presenting anonymous monologues written and submitted by Notre Dame students, faculty and staff. Cadet also served as an actor in 2013 and as executive producer for the 2015 performance.

“Theater is the only art form where you can feel like you are transported into another person’s shoes in a face-to-face way,” said ChoGlueck. “So many parts of our daily lives are mediated by screens, so it’s about removing that barrier and helping someone see a breathing, living person.  It often sparks something in the person and moves them toward action. We offer a lot of programming around how communities can then move these stories forward to effect cultural and social change.”

The idea of starting a nonprofit organization drew on the powerful experiences surrounding Show Some Skin and began bubbling up in earnest in 2015, when protests of the police killings of Michael Brown in Ferguson, Missouri, and Eric Garner in Staten Island, New York, were reaching college campuses.

“We saw this boiling up of injustice and oppression, all very much rooted in a lack of empathy,” said Cadet. “We also realized that marginalized people’s stories were not being centered in discussions that were happening. We know that theater and storytelling are powerful tools and started to wonder, how can we build an organization centering strategies of storytelling as a method for social change work on campuses around the country? We had seen stories do powerful things at Notre Dame and wanted to build on that.”

Cadet and ChoGlueck have visited colleges and universities in South Bend and beyond, traveling as far as New York and Rhode Island to provide training for students, faculty and staff looking to use counter-narrative storytelling as a method for building more inclusive campus communities and educating about intersectional oppressions and privilege. InterAction also provides interactive workshops and programming around a variety of topics, including coalition-building; using storytelling as a tool to enable cultural and policy change; and strategies for creating spaces that center the experiences and counter-narratives of young people of color.

And now, Cadet and ChoGlueck are busy planning InterAction’s first national Community Theater for Social Justice Action conference. The conference will run April 27-28 in South Bend and will feature keynote speaker Ntozake Shange, a poet, novelist, playwright, performer, and the creator of the show, For colored girls who have considered suicide / When the rainbow is enuf. The Kroc Institute for International Peace Studies is one of several organizations co-sponsoring the conference, along with the Notre Dame Department of Film, Television, and Theater and the Gender Studies Program. David Hooker, Notre Dame Associate Professor of the Practice of Conflict Transformation and Peacebuilding, and Bo Petersen, a South African actor and director, will also present “Telling Our Stories: Analyzing and Transforming Our Worlds,” a pre-conference session.

Cadet and ChoGlueck are clear that although live theater performances will be a big part of the program, the conference is not a theater festival, but rather a time for attendees to network and strategize together about ways to address the conference’s theme, “Uprooting Anti-Blackness and Racism.”

“The center of the conference is strategy circles,” said ChoGlueck. “We’ll spend time together thinking about tools and direct social justice action items to bring back to local communities and campuses on how to uproot anti-Blackness and racism.”

Both Cadet and ChoGlueck say that they draw on skills they learned in their peace studies classes every day in their work with InterAction.

“This is very strategy-oriented work and many of the tools we use, like circle processes, action planning and strategy circles have a basis in Kroc’s peace studies program,” said Cadet.

As they continue to dream about the future of InterAction, both Cadet and ChoGlueck hope that they can continue to bring students, artists and activists together to create hubs that equip and energize people engaged in social change work.

“We’re trying to build this hub that is critically engaged in intersectional racial justice in many forms,” said ChoGlueck. “We keep growing our impact through all the different programs and places we’re connecting.”

Registration for the conference is still open. Shange’s lecture on April 27, 7:00-9:00 p.m., is ticketed and open to the public. Tickets can be purchased through the South Bend Civic Theatre. You can also view the full conference schedule.

Notre Dame's Kroc Institute is one of the world's principal centers for the study of the causes of violent conflict and strategies for sustainable peace, and is an integral part of the new Keough School of Global Affairs. The Kroc Institute offers BA and PhD degrees in peace studies and supports the International Peace Studies concentration of the Keough School Master of Global Affairs.