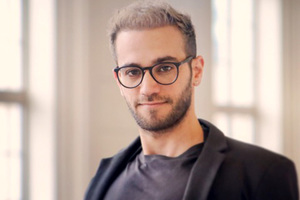 Six years ago, Jude Ash, ’17 M.A., stood outside on a dark street in Syria chanting “God, Syria, Freedom.” Today, he is a student completing his master’s degree in peace studies from Notre Dame’s Kroc Institute for International Peace Studies with plans to further his life's work in providing trauma therapy for the people of Syria.

After years of experiencing firsthand the physical and emotional trauma at the hands of the Bashar al-Assad regime — including a month-long stay in an underground Syrian jail for demonstrating — he was determined to re-focus his work on helping Syrians overcome the trauma they have experienced.

“When you are arrested, they send you underground and it truly is underground. I didn’t know if I was ever going to get out,” said Ash, describing both the physical and psychological torture he endured.

After his release from prison, Ash collaborated with a group of Syrian psychologists and created a community-based trauma therapy program, combining evidenced-based trauma therapy intervention techniques into core skills that can be learned in a training workshop. “It was important to use local community members to provide the therapy because they already enjoy considerable trust with the Syrian people,” he said.

Born in Syria and raised in United Arab Emirates, Ash moved back to Syria in 2005 to earn a degree in electronics and communication engineering. He co-founded a nonprofit organization centered on the Syrian crisis, called the “New Syrian Human.” This organization runs the “She Is Not Alone” project, which aides Syrian female torture-survivors in Turkey by creating business opportunities that provide a sustainable source of income.  In 2015, he also co-founded “The Syrian Pluralistic Nation,” a Syrian sociopolitical movement that mobilizes Syrians through the use of nonviolence towards freedom, dignity, and peace.

Ash believes that his peace studies education has prepared him for an even greater impact on the Syrian people. “The kind of resistance I was, and still am, involved with in Syria is nonviolent resistance,” he said. “Seeing our once nonviolent resistance become more militant as the regime commits war-crimes and the regional powers flood the country with weapons, I became really interested in studying nonviolent social movements and other peacebuilding tools empirically. That’s mainly why I chose the Kroc Institute’s program. I wanted to learn what works, and use it to help my people.”