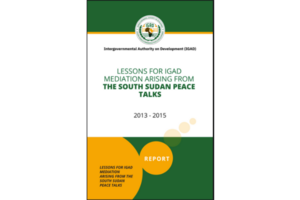 The Intergovernmental Authority on Development (IGAD) has just released a report on its mediation for South Sudan from 2013 to 2015.

This high-level mediation attempted to end the civil war that broke out in December 2013. Regrettably, the mediation was not successful and South Sudan remained gripped by war. The report identifies several lessons with the aim of strengthening IGAD mediation efforts in the future.

The report was commissioned by the IGAD Secretariat and supported by the Swiss Federal Department of Foreign Affairs. It was co-authored by David Lanz, co-head of the mediation program at swisspeace, Laurie Nathan, director of the Kroc Institute's mediation program and professor of the practice of mediation, and Corinne von Burg, program officer at swisspeace. Lanz was also a Kroc Instiute Scholar in Residence in 2019.