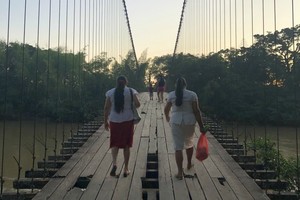 A new report published on December 7 presents an analysis of advances and challenges in the implementation of stipulations with a gender perspective in the Colombian Final Peace Agreement. The analysis covers the period between September 2018 and August 2019. The report reveals that while stipulations centered on gender equality and women’s rights are being implemented, the pace of implementation is slower than overall accord implementation.

The qualitative analysis revolves around four issues identified as priorities by women's organizations and other relevant actors: Territorial transformation, Comprehensive Rural Reform, and substitution of crops for illicit use; security guarantees for female and male social leaders and human rights defenders; reincorporation of members of the FARC-EP, where the role of women has been crucial in processes of community reconciliation and social fabric rebuilding; and the Comprehensive System of Truth, Justice, Reparation, and Non-Recurrence, which includes an institutional gender approach that relies on the effective participation of women.

Of the stipulations with a gender approach, 42 percent were not initiated by August 2019, compared to 27 percent not initiated in implementation of the overall Agreement, a difference of 15 percent. Likewise, among initiated commitments, there are a smaller number of commitments with a gender-based approach completed (17 percent) compared to the general implementation of the Agreement (25 percent).

Of the commitments on gender included in the Framework Plan for Implementation (PMI), half are long-term actions and should be fully implemented between 2019 and 2026. However, various delays already exist that have delayed implementation initiation. These commitments must be initiated far enough in advance to ensure that they are completed within the identified timeframes.

The quantitative analysis by point shows that the greatest advances in recent months have occurred in Point 5 (Victims’ Rights). The report highlights that the institutions that make up the Comprehensive System of Truth, Justice, Reparations, and Non-Recurrence (SIVJRNR) include parity as a guiding principle of their institutional structure and have incorporated methodologies that allow for the inclusion of gender and ethnic approaches in the collection and analysis of information. Likewise, mechanisms have been designed and implemented to promote the participation of women, Lesbian, Gay, Bisexual and Transgender (LGBT) individuals, and ethnic communities.

One of the milestone achievements analyzed during this period is the creation of the High Level Government Body for the Implementation of the Gender Approach to implement inclusive commitments within the PMI and guarantee the rights of women and LGBT individuals.

Progress has been made in the inclusion of measures with a focus on gender in the reincorporation of ex-members of the FARC-EP, including initiatives carried out by the Agency for Reincorporation and Normalization (ARN). The report also highlights the continuation of the Gender Working Group of the National Reincorporation Council (CNR), as well as the creation and signing of a national reincorporation policy document, which includes 18 affirmative measures on gender.

The report acknowledges that some progress has been made regarding regulatory advances for security guarantees, but security still poses a great challenge. New high-risk scenarios have emerged for female human rights defenders, as well as for the communities and organizations where they work. It remains necessary to strengthen individual and collective protections with a focus on gender, territorial, and ethnic communities. This also necessitates the strengthening of women's organizational and leadership initiatives in rural areas.

Three years after the signing of the Peace Agreement, the implementation process is at an inflection point where the creation of new institutional infrastructure and the approval of new standards and initiatives must be coordinated in order to better concentrate all efforts on territorial implementation.

The implementation of the gender approach can serve as a catalyst for peacebuilding and development processes at local and national levels to the extent that it provides opportunities for women leaders and strengthens their role as re-constructors of the social fabric affected by the armed conflict.

Without active participation of women in decision-making, the final Peace Agreement will not fulfill its purpose of closing social and economic gaps between men and women, and between those individuals in the territories who have been most affected by the armed conflict and the rest of the country.