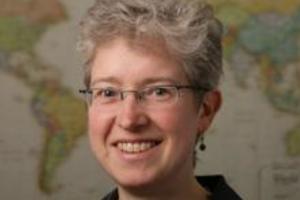 A new book by sociologist and peace studies scholar Jackie Smith describes the struggle between two visions of global society -- one focused on wealth and profits, and one centered on people’s rights and justice. While the former vision of globalization has dominated for the past 30 years, it is not the only model, says Smith in Social Movements for Global Democracy, recently released by Johns Hopkins University Press.

“Since the dawn of history, people have come together to promote a vision of a world order based on human rights,” she says. “In the 19th century, we had anti-slavery and labor rights movements. In the 20th century, we had civil rights and women’s rights movements. Today we have transnational activists – ‘democratic globalizers’ who work across international boundaries to build a world based on protecting human rights and the environment rather than on making money.”

Many of the citizens’ movements described in the book do not make headlines, but they are nonetheless helping to change the world, Smith says. For example, Kyoto Now! encourages universities and other institutions to cut their emissions of greenhouse gases, effectively adopting the global climate treaty without waiting for the U.S. government to do so. The Global Campaign Against Poverty works to ensure that poverty reduction takes priority over trade and economic growth on global policy agendas. Reclaim Our United Nations seeks to democratize the UN and refocus its agenda to meet human needs.

Smith’s book argues that such groups could be more effective if they organized more explicitly around the values that unite them – human rights and environmental sustainability – and if they focused on strengthening the United Nations so that it can establish its authority over global financial institutions.

The fact that the book’s release coincides with the national and international financial crisis makes its message even more timely, Smith says. “What we’re seeing is the inevitable result of a version of globalization that treats the world as single marketplace where citizens are consumers and value is measured in dollars and cents. We need to set up our global and national institutions so that economic growth is a byproduct of human rights and environmental protection not the other way around.”

The book is a much-needed contribution to scholarly study on the causes of violence and war, Smith says. “An ongoing dilemma in peace studies is: Do we focus on ways to stop the wars and violence that are already happening, or do we deal with the injustices that cause violence to erupt in the first place? Much peace research and literature focuses on wars and the aftermath of wars. We also need to understand and prevent the inequality and related structural violence that lead to conflict.”

A book launch to celebrate the publication of Social Movements for Global Democracy will begin at 4:15 p.m. on Tuesday, Oct. 28, in Room C-103 of Notre Dame’s Hesburgh Center for International Studies. It will be followed by a reception and book signing.