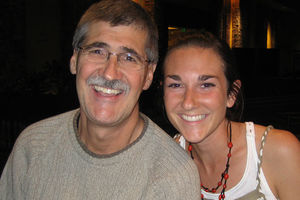 John Paul Lederach and Angela Jill Lederach have written When Blood and Bones Cry Out: Journeys Through the Soundscape of Healing and Reconciliation. Published by University of Queensland Press, the book challenges the traditional idea that healing and reconciliation are linear and sequential “post-conflict” processes. Instead, the authors write, healing (after war, near-death experiences, or sexual violence) is circular and dynamic, and can continue even when the violence hasn’t stopped.

“We often hear that there are ‘phases’ in healing and reconciliation, but that isn’t the experience of many people in local communities,” said John Paul, professor of international peacebuilding at Notre Dame’s Kroc Institute for International Peace Studies. “Even the concept of ‘post conflict’ is fiction, as people live through repeated cycles of violence. We wanted to document and explore how people who had faced the unspeakable found their voices. And much of it came back to poetry, music, and sound.”

The authors explore the role of metaphors and music — from Tibetan singing bowls to the lyrics of Van Morrison — in personal and community healing. The book tells the stories of a mass women’s movement in Liberia; elders walking between warring clans in Somalia; former child soldiers in refugee camps; victims of rape in Sierra Leone; and John Paul and Angela’s own deeply personal experiences with trauma.

“Everywhere we went, we heard themes of circles and repeating patterns,” said Angela, a 2007 graduate of Notre Dame (anthropology/peace studies), who has lived and worked in Central America, West Africa, the Philippines, and the United States. “The stories came from people who are working tirelessly to hold their communities together. They don’t have time to consider whether they are using an accepted model, and so their ideas and approaches may seem radical to western ways of thinking.”

The book “shows the resilience it takes for people to overcome devastating experiences with grace,” Angela said. “I think there’s a lot of hope in it.”