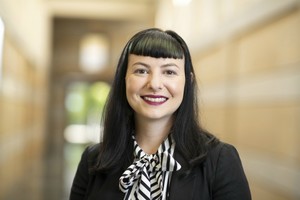 In her newly published book, “Marxism and Intersectionality: Race, Gender, Class and Sexuality under Contemporary Capitalism,” Ashley Bohrer explores the connections between oppression and exploitation by drawing on the socioeconomic tradition of Marxism and intersectionality, the theory that the overlap of various social identities, such as race, gender, sexuality, and class, contributes to the ways systemic oppression and discrimination are experienced by an individual. She suggests strategies for more effective activism and coalition-building based on bringing both schools of thought into conversation.

“Both as scholars and activists, we live in a time of deep acrimonious debate between Marxism and intersectionality, often based in miscommunication and caricature,” says Bohrer, assistant professor of gender and peace studies at the University of Notre Dame’s Kroc Institute for International Peace Studies, part of the Keough School of Global Affairs. “Even getting to a space where these two perspectives can have a real, deep conversation, including disagreement, feels like an imperative.”

Rather than understanding capitalism as one easily defined financial system, Bohrer argues for an understanding of capitalism as a dynamic “web” of histories and strategies whose form can shift throughout history and in different locations. She argues that capitalism is not just an economic system, but a system that is engaged in the accumulation of wealth, power, and difference and is inherently shaped by understandings of race, gender, sexuality and nationality.

Bohrer suggests that bringing Marxism and intersectionality into conversation allows for the possibility of movements that are better equipped to address capitalism’s complexities.

Her research encourages both academics and activists to focus on research and movements that create a more holistic solidarity that moves beyond connection built on either “lowest common denominator” similarities or building bridges across difference. This form of solidarity requires a more complex understanding of the ways all people are shaped by systemic forms of oppression like sexism, classism, and racism, and the ways that the system of capitalism binds people together, often painfully.

“Sexism affects men, women, women of color, and queer people differently, but we are all affected,” says Bohrer. “How do we think together about how we are all impacted?”

Bohrer also uses the example of the reliance of immigrant labor in the United States as an example of the ways that capitalism and racial identity interact on a national scale. In 2017, immigrants’ rights groups organized a “Day Without an Immigrant” protest to illustrate the contradiction between the reliance of individuals across the U.S. on immigrant labor while xenophobia and national policies regarding incarceration and deportation of immigrants are expanding.

For Bohrer, acting in solidarity necessitates understanding that collective liberation is bound up together, but that people also experience exploitation and oppression differently based on their social location, multiple identities, privilege, and power.

In order for deep-seated change to occur, Bohrer suggests both activists and academics must resist the urge to pit large-scale “universal projects” (like universal health care, student loan forgiveness) against “specific demands” (like reparations). Rather, she says, solutions must be tailored to and rooted in particular communities’ needs and grow out of the work of diverse coalitions.

Bohrer also hopes that this book and its bibliography will help broaden conversations and sources across the field of peace studies.

“Peace studies has always been interested in sketching the multiple ways the world is constructed by violence and thinking about ways to undo that,” says Bohrer. “This project explores a different way to understand the system of domination that we live in and gestures toward content and sources both within and beyond the traditional peace studies bibliography. I hope it helps to expand the places we look for both diagnoses and solutions.”