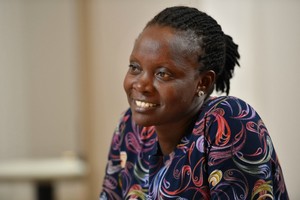 Victoria Nyanjura, a student in the University of Notre Dame Master of Global Affairs, International Peace Studies program, is a first place recipient of the Navarra International Solidarity Award. Organized by the Government of Navarre, Spain, and Laboral Kutxa, a Spanish credit union, the award recognizes people, NGO’s, and institutions whose work advances the United Nations sustainable development goals.

The award recognized Nyanjura’s work to advocate for women and children in Gulu, Uganda. Prior to enrolling at Notre Dame, she worked at International Justice Mission, an organization that seeks to transform justice systems and protect widows from the practice of property grabbing (the unlawful eviction of landowners through coercive and often violent methods).

Nyanjura also worked as a project assistant for the Gender Justice Department of the Ugandan Justice and Reconciliation Project, an organization that works with war-affected communities, and is also a member of the Women’s Advocacy Network. She was instrumental in organizing a petition for redress that resulted in the Ugandan parliament unanimously passing a resolution to address the plight of victims of Northern Ugandan conflicts.

Nyanjura knows well the costs of the conflicts in Uganda. In 1996, Nyanjura, then 14, was abducted from St. Mary’s College in Aboke, Uganda, by the paramilitary group the Lord’s Resistance Army. She remained a prisoner for eight years, and was subjected to torture and inhumane treatment before she was able to escape.

"We are honored to have Victoria join our cohort of Peace Studies Master's students this year," said Susan St. Ville, Director of the International Peace Studies Concentration, Keough School Master's in Global Affairs. "She brings a wealth of insight from her important work on the ground in Uganda, as well as her own personal experiences and resilience. Her voice adds a unique dimension that enriches the knowledge of us all. We are delighted to celebrate with her as she receives this honor."

Nyanjura shared the International Solidarity Award and a 25,000 euro prize with three other women, Hulo Guillabert, Theresa Kachindamoto, and Oumou Sall-Seck, for their work to advance human rights for African women. The group was nominated by the Spanish diplomatic organization Casa África.

In the nomination letter that he submitted, Casa África director general, Luis Padrón López, wrote, “Women are the engine of the world and this is especially evident in Africa. Women [in Africa] lead the social changes that favor a better, fairer world; in which human rights will not be violated. These four women struggle to dignify their society through the defense of human rights.”

The University of Notre Dame's Kroc Institute for International Peace Studies, part of the Keough School of Global Affairs, is one of the world's leading centers for the study of the causes of violent conflict and strategies for sustainable peace. The Master of Global Affairs, International Peace Studies concentration is for students committed to building sustainable peace and justice through careers in policy analysis and political change, government and organizational leadership, and conflict analysis, and transformation. You’ll join a global network of more than 500 Kroc Institute master’s graduates addressing violent conflict and peace, human rights and human development, environmental sustainability, and related issues.

Apply now to join the MGA class entering in Fall 2019