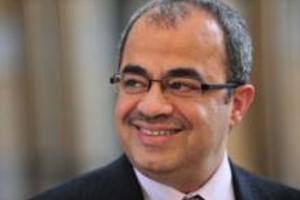 Shahin’s scholarship examines the foundations for democracy and political reform within Islamic law, philosophy, and political practices. At the Kroc Institute, he will continue his work on the interaction between Islam and politics, especially in the Middle East. He also will be part of a new research collaborative of Muslim and Catholic scholars and public intellectuals, drawn together by the Kroc Institute, who are examining how the world’s two largest religious communities are wrestling with a wide range of contemporary global challenges.

An award-winning teacher, Shahin is offering a new class, Contemporary Political Islam, to Notre Dame undergraduates. His recent work includes Political Ascent: Contemporary Islamic Movements in North Africa, co-editorship of Struggling over Democracy in the Middle East and North Africa, and co-authorship of “Islam and Democracy,” published in Arabic.