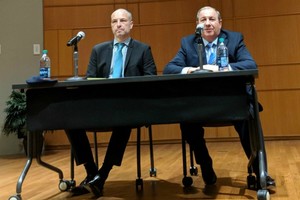 On April 17, as part of the Introduction to Peace Studies class at the University of Notre Dame, George A. Lopez and Sean King, two experts on the long-term conflict between the United States and North Korea, hosted an open conversation. Both Lopez and King addressed the upcoming meetings between U.S. President Donald Trump and Kim Jong Un, North Korea’s leader, and offered insights into what leaders from both countries might be looking for as part of the conversation.

The session, titled “Prospects for Dealing with North Korea” brought together Lopez, the Rev. Theodore M. Hesburgh, C.S.C., Professor Emeritus of Peace Studies at the University of Notre Dame and a former member of the United Nations Panel of Experts for monitoring and implementing UN sanctions on North Korea, and Sean King, Senior Vice President for Park Strategies, LLC, a graduate of the Mendoza College of Business’s MBA program, and a regular guest lecturer at Mendoza on East Asian financial affairs.

“Sean’s and my paths have intersected over the past two years as we are both offering policy and media commentary on the crisis with North Korea,” said Lopez. “Our views are somewhat different on a few issues and he brings a great finger on the pulse of East Asia economics and politics that our students need to hear."

Although the conversation was part of a regular class session, it drew an additional 40 attendees from across the university and community. Topics of conversation included priorities for the U.S. in any upcoming negotiations, the positive or negative impact of a formal peace treaty and questions about how to address human rights abuses in North Korea, among others.

Coverage of this event was provided by the Kroc Institute for International Peace Studies and the Liu Institute for Asia and Asian Studies, both part of the Keough School of Global Affairs.

Listen to the full conversation: