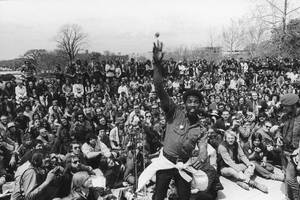 This month marks the 50th anniversary of the release of the Pentagon Papers, which confirmed that U.S. leaders lied about the Vietnam War and sent American troops to fight a war they knew was unwinnable and that many considered unjust. The soldiers who served in the war knew that already, and many returned from Vietnam to speak out for peace. This issue of Peace Policy examines the antiwar movement that emerged in the military and among veterans during the Vietnam War and reflects on some of the lessons of that movement for today.

David Cortright describes how widespread dissent and resistance in the ranks helped to end the Vietnam War. More »

Dana Moss offers a social movement analysis of the strategic significance of antiwar resistance in the military. More »

Chuck Searcy recounts his journey back to Vietnam and the work he and others have undertaken to heal the wounds of war and seek reconciliation with our former adversaries. More »

Peace Policy offers research-based insights, commentary, and solutions to the global challenge of violent conflict. Each issue features the writing of scholars and practitioners who investigate the causes of violent conflict and who seek to contribute to effective solutions and alternatives to the use of force.

Visit the latest issue of Peace Policy at peacepolicy.nd.edu