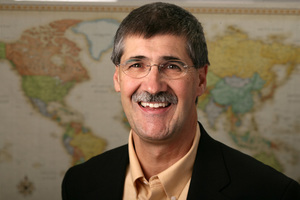 John Paul Lederach, professor of international peacebuilding at the Kroc Institute, has been awarded Notre Dame’s Reinhold Niebuhr Award. The award is made annually to a Notre Dame student, faculty member, or administrator whose life and writings promote or exemplify social justice.

“This year’s recipient has spent his life advancing the cause of peace,” said Notre Dame provost Tom Burish as he presented the award to Lederach on May 19. “From Nicaragua to Nepal, the Philippines to Colombia, he has served as mediator, strategist, and catalyst for peacebuilding. As the leading theorist of the concept of conflict transformation, he advises governments, religious organizations, universities, and community groups striving to reconcile societies torn apart by violence.

“As a practitioner of peace, he accompanies the poor, the refugees, and the victims of war — eliciting from them alternatives to violence. His wide-ranging experiences, profound analyses, and deep moral imagination have formed the basis for a corpus of writing that has enlightened peace studies scholars and peacebuilders around the globe.  He is, in the words of St. Francis of Assisi, ‘an instrument of peace.’

“We are proud to present the Reinhold Niebuhr Award to John Paul Lederach, professor of international peacebuilding, Kroc Institute for International Peace Studies.”

Rev. Theodore M. Hesburgh, C.S.C., president emeritus of Notre Dame, was the first recipient of the Reinhold Niebuhr award, sponsored by friends of the renowned Protestant theologian and author. In September 1972, Father Hesburgh announced the establishment of a Reinhold Niebuhr Award at the University of Notre Dame.