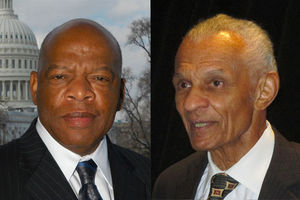 At the Kroc Institute we honor the legacy of two civil rights giants who passed away last Friday: Representative John Lewis, a nonviolent student civil rights leader in the 1960s who later served for more than 30 years as a member of the U.S. Congress, and Rev. Cordy Tindell “C.T.” Vivian, former field organizer of the civil rights movement and stalwart ally of Dr. Martin Luther King Jr and the Southern Christian Leadership Conference. Among their many actions for justice, both Lewis and Vivian participated in lunch counter sit-ins and were Freedom Riders, civil rights activists who rode buses through southern states advocating for an end to segregation in bus terminals and other public places during the civil rights movement.

In the midst of the ongoing Black Lives Matter movement calling for an end to police violence and systemic racism in the U.S., Lewis and Vivian stand as shining examples of the power of advocacy and protest for prompting social change. As key allies and partners with Dr. King, they illustrated how to bring about effective social, political and economic change through disciplined nonviolent action and the willingness to sacrifice for the cause of justice. Their spirits are alive today in the protests of millions of citizens who are working to fulfill and expand the vision of the Civil Rights Movement in all aspects of American life.

Inspired by the example of rights advocates like Lewis and Vivian, the Kroc Institute teaches the principles and techniques of conflict transformation to our students. We seek to understand the many forms of structural violence that deny opportunity to people of color and marginalized populations in this country and around the world. We train students to use research, education, and nonviolent action to overcome exclusion and inequality and to build the “beloved community” that Dr. King, John Lewis and C.T. Vivian sought to create.