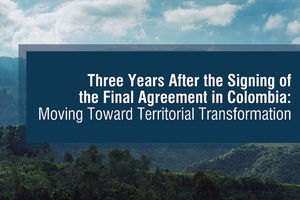 On June 16, the University of Notre Dame’s Kroc Institute for International Peace Studies published its fourth comprehensive report on the status of peace agreement implementation in Colombia, covering the period between December 2018 and November 2019. In addition to describing the current status of implementation, the report includes comparative findings and identifies obstacles and opportunities facing Colombia’s peace process.

According to the report, implementation of the Final Agreement in Colombia is entering a new phase with a greater focus on rural territories. The report suggests that to be successful it will be necessary to build upon previous achievements and reinforce positive transformation in the areas throughout the country most affected by violence. The Institute monitors and provides quantitative and qualitative analysis of all 578 commitments included in the 2016 Peace Agreement in order to offer a detailed and independent perspective on implementation progress.

The report emphasizes that implementation in Colombia is at a crucial point, transitioning from a focus on short-term efforts to medium- and long-term priorities, as well as moving toward the provisions with a territorial focus. These medium and long-term efforts are especially imperative for implementing the cross-cutting approaches within the Final Agreement related to gender, ethnic communities, and the territorial approach.

Since most tasks related to creating national implementation organizations are completed, the challenge for the fourth year is to ensure that the Agreement also becomes reality for the regions most affected by the armed conflict, especially those where the government’s presence and work has historically been slow and precarious.

The report also identifies priorities for the future, including reducing socio-economic gaps between urban and rural areas; ensuring the reintegration of ex-combatants; guaranteeing the rights of victims; and advancing the cross-cutting approaches. By moving forward with comprehensive and timely implementation, Colombia will be able to demonstrate that it is not only an example of how to negotiate a peace agreement, but also a model for implementation, transformation and building stable and lasting peace.

Between December 2018 and November 2019, the overall progress of implementation was six percent. However, the third year marks a change in the types of commitments being implemented. During the first two years, substantial progress was made to end armed conflict (point 3 in the Agreement) and to create implementation, verification and endorsement mechanisms (point 6).

In 2019, the main focus was on implementation of the Agreement in territories most affected by the armed conflict. As part of the focus on victims of the conflict (point 5), the organizations that comprise the Comprehensive System of Truth, Justice, Reparation and Non-Repetition (SIVJRNR) were launched. By fulfilling their respective mandates, the entities have gained legitimacy with victims, for whom reparations are underway. During the period covered by the report and through the essential support of the international community, these entities deployed programs in the territories and led broad, collaborative processes, especially engaging women, LGBT+ people and ethnic communities.

Progress related to Comprehensive Rural Reform (point 1) and the Solution to the Problem of Illicit Drugs (point 4) has been significantly less. The report highlights efforts to advance a multipurpose cadastre (property and real estate registry) and create Territorial Development Plans (PDET). However, major challenges exist related to the socio-economic reincorporation of ex-combatants. Although the Comprehensive National Plan for the Substitution of Crops for Illegal Use (PNIS) was maintained, guaranteeing security to ex-combatants continues to be the biggest threat to implementation. According to the United Nations, 2019 was the deadliest year for ex-combatants, with 77 murders recorded (almost 23 times more than the national murder rate).

Among innovations in the fourth report is the presentation of Kroc Institute findings based on the comparison of peace agreement implementation in other international contexts that are particularly relevant to the Colombian process.

Since implementation of Colombia’s Final Agreement is at a key point of transition, the Kroc Institute report suggests the need to re-prioritize implementation plans to boost territorial transformation and promote robust participation of civil society, especially local communities.

The report also recommends renewed focus on the cross-cutting ethnic and gender approaches, by opening, maintaining and consolidating spaces with the National Government and implementation organizations to facilitate the participation of women, LGBT+ people and ethnic communities. In addition, implementation should prioritize commitments that include affirmative gender actions related to Integral Rural Reform and the substitution of crops for illicit use.

In the midst of the coronavirus global pandemic, the Kroc Institute report calls for a better understanding of how the economic and social reforms laid out by the Agreement—including the focus on territorial, ethnic, and gender concerns—are more urgent than ever in order to address widening inequalities and build a more inclusive Colombian society.

Read the full report (in Spanish) >>>

You are also invited to join the Kroc Institute for a live virtual launch event on Wednesday, June 17, at Noon EDT. Click here to register to attend >>>

The University of Notre Dame’s Kroc Institute for International Peace Studies, part of the Keough School of Global Affairs, is one of the world's leading centers for peace studies and research.

The Peace Accords Matrix Project (PAM) is one of its principal research projects, and includes the largest and most comprehensive database focused on the implementation of 34 comprehensive peace agreements negotiated since 1989.

The 2016 Colombian Peace Agreement between the Colombian government and the FARC-EP names the Kroc Institute as part of the international verification component. The Institute is responsible for technical support and monitoring implementation. The Kroc Institute is committed to accompanying Colombia by generating reports and information that ensure implementation compliance and facilitate decision making to support efforts to build stable and lasting peace.

In Colombia, the Kroc Institute partners with the Colombian Caritas - National Ministry of Social Pastoral. The preparation of report four was supported by the United Nations Multi-Donor Fund for Post-conflict in Colombia, the European Union’s Instrument contributing to Stability and Peace, the United States Embassy in Colombia and Humanity United.