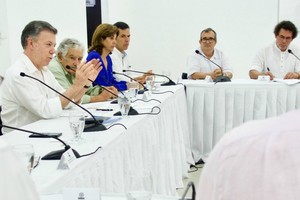 On Saturday, May 5, the Peace Accords Matrix (PAM) Barometer Project of the University of Notre Dame’s Kroc Institute for International Peace Studies presented a partial update on the implementation of the Colombian peace accord to a group of leaders in Cartagena de Indias, Colombia.

The briefing was presented by Borja Paladini Adell, the Kroc Institute’s Colombia Representative. Meeting attendees included Colombian President Juan Manuel Santos and Vice President Oscar Naranjo, as well as former Spanish Prime Minister Felipe González and Uruguay’s former President José Mujica who are leading a commission verifying the compliance with the accord by both the Colombian government and the rebel group FARC. The meeting also included FARC leaders, representatives from the European Union and the United Nations, and several other international and national representatives.

In his briefing, Paladini Adell noted that progress has continued, but there are urgent challenges that need to be addressed strategically. He emphasized that continued joint efforts will be required to push the peace process forward with particular focus on implementing the long-term reintegration program for former combatants and providing security to human rights leaders and other social actors at the local level.

According to Paladini Adell, the participants “renewed their commitment to implement the agreement, to constructively address challenges facing the implementation of the peace accord, and to continue working to transform the root causes of the conflict in Colombia.”

Both government and FARC leaders expressed the need to continue to work diligently and agreed to re-accelerate the pace of implementation over the next three months.

In a statement following the meeting, President Santos emphasized that “all Colombians should feel proud of what they have achieved and proud of what we are going to achieve.” He pledged to do everything in his power until his last day in office to guarantee that the government complies with the peace accord and continues implementation.

The Kroc Institute will release its second full report on the status of implementation in July 2018 (Update: The second report will be released in early August 2018). The first report was released in November 2017.

The historic Colombia peace agreement signed in November 2016 gives the Kroc Institute primary responsibility for technical verification and monitoring of implementation of the accord through the PAM project. The Kroc Institute is part of the new Keough School of Global Affairs.

About the Kroc Institute for International Peace Studies

The University of Notre Dame's Kroc Institute for International Peace Studies, part of the Keough School of Global Affairs, is one of the world's leading centers for the study of the causes of violent conflict and strategies for sustainable peace. One of its main projects is the Peace Accords Matrix, which constitutes the largest and most comprehensive database about the implementation of 34 international peace agreements negotiated since 1989.