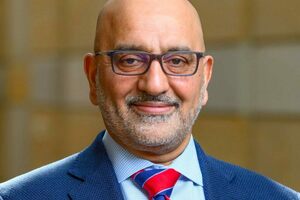 Ebrahim Moosa, a scholar of Islam from the University of Notre Dame’s Keough School of Global Affairs, called upon US leaders to adopt a nuanced and locally-informed strategy when working to engage with religious communities around the globe. During an expert testimony at a recent hearing of the United States Commission on International Religious Freedom (USCIRF), Moosa also urged leaders to take a bold approach.

“We need to be brave, and what USCIRF might want to do is to say we need to work with non-typical actors,” said Moosa, the Mirza Family Professor of Islamic Thought and Muslim Societies.“Boldness and complexity are the key things,” Moosa said during the hearing. “Rural people and women have a different understanding of how they think of themselves in different contexts. We need to know firsthand how they think the world works. We need to talk to religious groups that say to us what we want to hear, but also to those we don’t want to hear.”

Moosa’s testimony focused on how the US can support religious freedom. He called upon policymakers to pay attention to the dynamic and lived faith of local leaders and the people those leaders serve in India, Pakistan, and beyond. The hearing, titled “Strategies for Religious Freedom in Fragile States,” explored strategies to advance freedom of religion and belief in fragile states where, far too often, religious identity is linked to conflict and repression. Faith affiliation and other interconnected identity markers may result in unequal access to resources, and in many contexts, fractures in communal trust, and the appeal of extremism in places with weak or compromised governance.

Moosa’s views are informed, in part, by differences between his own childhood education at a madrasa, an Islamic school, and his current vision for a revitalized Islamic tradition that confidently engages contemporary science and modern ethical systems such as human rights. For the past five years, Moosa has co-directed the Madrasa Discourses, an intensive educational program that seeks to advance broad views on science, theology, politics and governance, gender roles, and history in Islam, while navigating a range of knowledge traditions beginning with Islam. Administered by the Keough School’s Kroc Institute for International Peace Studies, the program was created in response to South Asian leaders’ call for a new generation of madrasa educators.

He cautioned against any approach that assumes an understanding of “religious freedom” and “religious minorities” without considering the complex and contentious nature of the terms “freedom” and “religion.” It is important to know whose freedom and religion is addressed and who defines each, Moosa said. In Syria, for example, it is a ruling Alawite minority that brutally controls much of the state. In Afghanistan, US efforts engaged urban and modern elites in nation-building while ignoring less visible sectors of society. Even believers from the same faith tradition can hold a broad spectrum of beliefs, Moosa said. Some reach out to care for all humanity, while others see only “enemies” beyond their borders.

“People are suspicious and ask, ‘What do you mean by religious freedom?’” Moosa said. “‘Do you want the Ahmadis in Pakistan to flourish? Or do you want the Shias or the Sunnis to flourish in this context?’”

To advocate for religious freedom, Moosa said, US leaders must learn what “freedom of religion and belief” means in various contexts. Contexts can range from intensely private domains to publicly shared cultural and public practices with different conventions, practices, and norms.

Part of this understanding, Moosa said, is to learn the limits of what religion can achieve by itself. Faith-based actors will fill some gaps in places where a weak state fails to protect human dignity. But strong security, governance, and economic infrastructures are also necessary preconditions for religious freedom to flourish, he said. Religious freedom is not a panacea for poverty. Promoting religious freedom that is not informed and committed to the long-term flourishing of societies is destined to fail.

“The US government can work through some of these faith-based actors to provide critical services from humanitarian aid to education, but it must do so in a conflict-sensitive way and ensure it clearly maps an intervention’s impact on the religious power dynamics in an area,” Moosa said. “An intervention that doesn’t pay attention to power dynamics, meanwhile, can end up supporting only one religious identity group and deepening patterns of animosity that exacerbate intolerance.”

Nury Turkel, the Uyghur-American lawyer and human rights expert who serves as USCIRF co-chair, said the testimony from Moosa and other experts will help the US government craft more effective policies and interventions in fragile states, from Lebanon and Myanmar to Nigeria and the Sahel.

“While the link between fragility and violations of the right to freedom of religion or belief are clear, the avenues for successful policy intervention are often less so,” Turkel said. “This is why it is so important that we think creatively and innovatively about how to construct and implement strategies that will improve religious freedom conditions in these fragile states.”