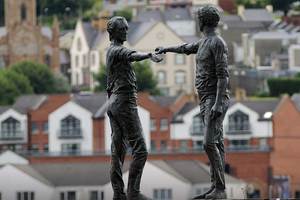 The University of Notre Dame’s Keough School of Global Affairs and the Embassy of Ireland will host the forum “Strategies for Lasting Peace Accords” at 9 a.m. Tuesday (June 12) at the Keough School’s new Washington, D.C., office, 1616 P St. NW, Suite 120.

Marking the 20th anniversary of the Good Friday Agreement among the Irish and British governments and political parties of Northern Ireland, the event will discuss lessons from that peace process as well as the Colombian peace accord.

The forum is free and open to the public. Advance registration is available at keough.nd.edu/strategies-for-lasting-peace.

Ireland’s former Deputy Prime Minister Eamon Gilmore, who currently serves as the European Union’s special envoy to the peace process in Colombia, will deliver the keynote address. Gilmore served as Ireland’s deputy prime minister (tánaiste) and minister for foreign affairs and trade from 2011 to 2014. He represented the Irish government in the Northern Ireland peace process.

Ambassador of Ireland to the U.S. Daniel Mulhall, co-host of the event, offered his reflections on the forum’s significance. “I am delighted that Notre Dame is partnering with the Embassy of Ireland for its inaugural event at the Keough School’s Washington office,” said Mulhall. “Despite current difficulties, the Good Friday Agreement has been a great success in bringing peace to Northern Ireland and providing a positive framework for its future. While every conflict is unique in character, there are lessons to be drawn from the Northern Ireland peace process, that may have application elsewhere, including in Colombia.”

“Convening such accomplished peacebuilders is an honor and privilege,” said R. Scott Appleby, Marilyn Keough Dean of the Keough School of Global Affairs. “We are delighted to be partnering with the Embassy of Ireland to celebrate progress toward stability and peace in Northern Ireland, Colombia and elsewhere. And we all know that there is much hard work ahead.”

The Donald R. Keough School of Global Affairs opened in 2017. In keeping with Notre Dame’s mission to place scholarship in service to the common good, the Keough School advances integral human development through research, policy and practice, transformative educational programs, and partnerships for global engagement.

The Keough School’s Washington office opened in late April of this year. The facility, located in the DuPont Circle neighborhood in northwest Washington, serves the University of Notre Dame for teaching, research, policy events and alumni engagement.

The Kroc Institute for International Peace Studies, an integral part of the new Keough School, holds primary responsibility for verification and monitoring of implementation of the Colombia peace accord through the Peace Accords Matrix Barometer Initiative. It is the first time a university-based research center has played such a role and the first time researchers have measured the implementation of a peace accord in real time.

Originally published by Christine Cox at news.nd.edu on June 11, 2018.